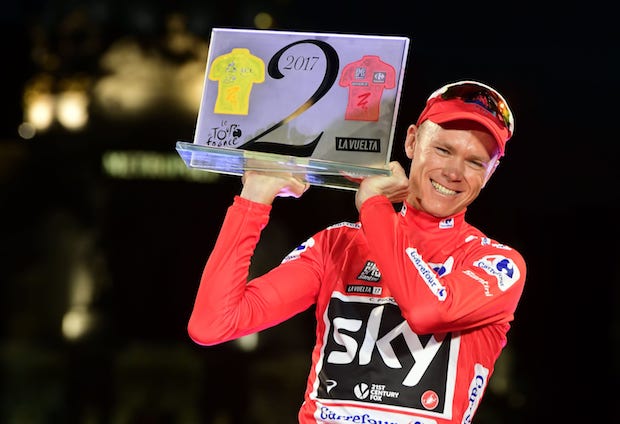 (Reuters) – Chris Froome joined the pantheon of cycling greats on Sunday as he secured his first Vuelta a Espana victory, becoming the first rider since Frenchman Bernard Hinault in 1978 to win the Tour de France and Vuelta in the same season.

Frenchman Jacques Anquetil also did the double in 1963 although the Briton is the first man to win both since the Vuelta was shifted from its old start date of late April to late August, when temperatures in Spain are at their most unforgiving.

Even though Froome has dominated the Tour de France in recent times, with four wins in five years and three victories in a row, he has long talked about having unfinished business in the Vuelta, the race where he first made his name in 2011.

“I think it probably is my greatest achievement, being the first person to win the Tour de France and then go on to win the Vuelta,” Froome said.

“I have to say that is probably the toughest Grand Tour I’ve ever ridden. There was something different happening every day. I’ve had good days and then I’ve been lying on the ground, bleeding, thinking my race might be over. It’s been a rollercoaster –- absolutely relentless.”

Six years ago the Kenyan-born rider catapulted himself from a little-known domestique to a serious grand tour contender by upstaging Sky team mate Bradley Wiggins in the Vuelta with a stunning time-trial victory and impressive displays in the mountains.

He finished second overall behind Juan Jose Cobo, missing out on first place by 13 seconds.

That unexpected yet remarkable showing sparked a long mission to win the Vuelta. Froome came fourth in 2012 and second again in 2014 and 2016, while he was forced to abandon the race in 2015 after breaking a foot in a crash.

Froome missed out on the top prize in 2016 after a disastrous team display in stage 16 in Formigal, which lead to a radical makeover in the squad for this year’s Vuelta with only Christian Knees keeping his place along with the Briton.

“He’s won four of them so for him the Vuelta was a bigger battle and more complicated for him, it was one he really wanted to win.”

The Briton took the red jersey on the third stage in Andorra, before the race had even entered Spain, and rarely looked like losing it.

He struck his first real blow with a sharp, late attack to outstrip Esteban Chaves and win stage nine, his first grand tour stage victory of the season, and took a giant step toward the overall win with a dominant display in the individual time trial in stage 16, beating Wilco Kelderman by 29 seconds.

“What Chris Froome has achieved over the last 12 months has cemented his place as one of Britain’s greatest sportsmen,” said British Cycling’s chief executive Julie Harrington.

“To win the Tour de France and Vuelta a Espana in the same year puts him up there with the best Grand Tour riders in the history of the sport. The cycling community in this country and indeed the whole nation are extremely proud of him.”

The victory also gives some relief to Team Sky and principal Dave Brailsford after the team became mired in controversy over the contents of a ‘jiffy bag’ delivered to them at the 2011 Criterium du Dauphine.

The allegations sparked an investigation by UK Anti-Doping and a parliamentary hearing.

Froome said in June that he was never offered triamcinolone by the team and was not aware of other Sky riders taking it.