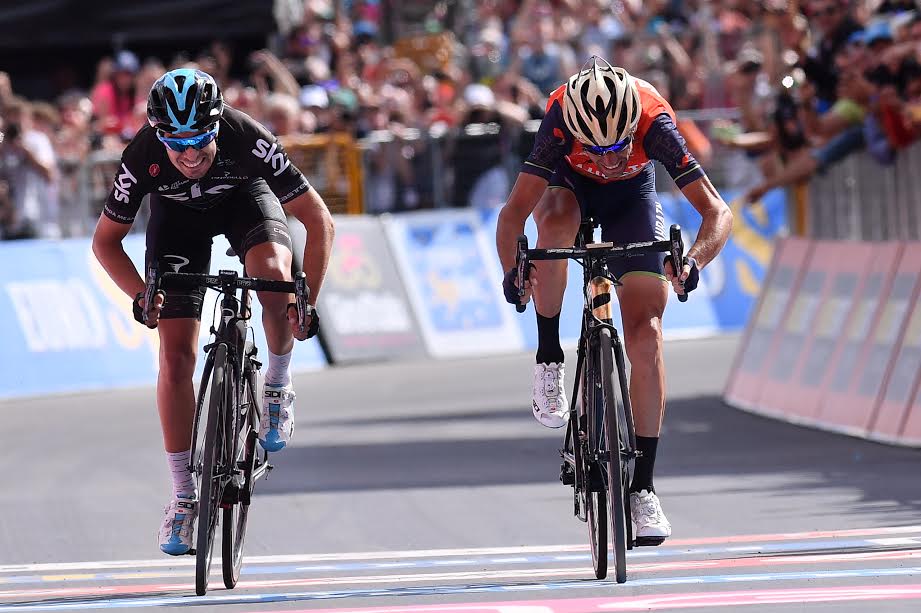 Vincenzo Nibali (Bahrain Merida) won the Queen Stage of the 2017 Giro d’Italia after overall leader Tom Dumoulin lead was slashed after having to take a toilet break ahead of the last climb of the day.

On the final descent of the day, Nibali took several risks and went on to catch Mikel Landa (Team Sky). The two of them went ahead and fought for the stage in a sprint that was won by the Italian rider. Dumoulin kept the maglia rosa by 31” amid the controversy of Bahrain-Merida and Katusha-Alpecin attacking when he had to attend a nature call.

“I just had some problems. I needed to take a dump,” Dumoulin said. “I started to feel it in the downhill of the Stelvio and I had to stop. Back on the bike I decided to fight and draw conclusions after the finish. I’m still in the maglia rosa but I’m above all very disappointed.”

On the final categorized climb of the day, the early breakaway of Mikel Landa, Steven Kruijswijk (LottoNL-Jumbo), and Jan Hirt (CCC Sprandi Polkowice) disintegrated. Landa rode on alone, but once Nibali attacked late in the climb, the gap was down to a matter of seconds. Nibali crested the mountain with Quintana, Domenico Pozzovivo (Ag2r La Mondiale), and Ilnur Zakarin (Katusha-Alpecin).

Nibali’s notorious descending skills paid off as he bridged to Landa and scooped up a few seconds on Quintana, as well as the stage win.

“It’s the victory of a complete rider,” Nibali added. “I had to be consistent from start to finish in a long and difficult stage. At the end I had to be an aggressive climber, a good downhill rider and a sprinter.”

And it’s @vincenzonibali who wins Stage 16!

What a dramatic day of #Giro100 we’ve had today! pic.twitter.com/whGWOTNNDa