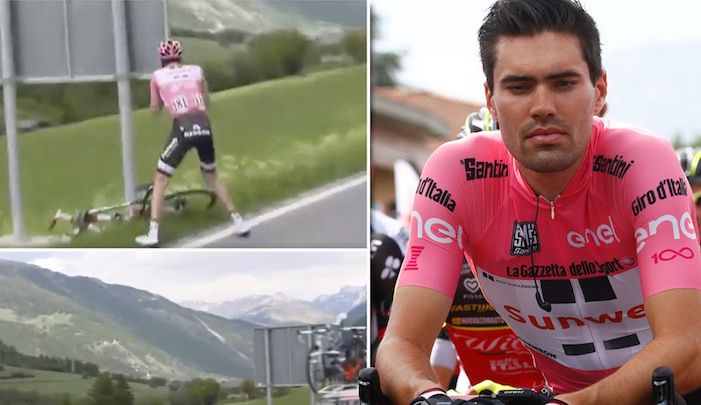 Peter Sagan gets kicked off from the 2017 Tour de France

Peter Sagan’s Tour de France came to an abrupt end on stage four to Vittel. Mark Cavendish worked his way ahead on the right side of the road when Sagan’s right elbow shot out. Cavendish fell at high speed when he ran out of room and broke his right shoulder blade.

The world of cycling was divided as to whether the Slovakian deserved such a stringent punishment. The plot thickened when it emerged that Arnaud Demare – who went on to win the stage – may have been more at fault.

A moment of madness left cycling fans shocked back in May as the image of Dumoulin quickly whipping his pink leader’s jersey off at the side of the road to answer the most urgent call of nature.

With 30km remaining from stage 16 of the Giro, Dumoulin got off his bike, did the deed, returned a minute later and got back racing. Movistar and Bahrain-Merida, however, kept racing, and Dumoulin lost more than two minutes.

Before his crash in Dusseldorf, Valverde was enjoying yet another successful year in his golden years, winning several stage races and his favourites, Liege-Bastogne-Liege and Fleche Wallone.

During stage 9, other GC favourite suffered a horror crash at the Tour de France. Richie Porte was sent flying after skidding off the road on the Mont du Chat while travelling at 72.5km/h. He took out Dan Martin in the process, but the Irishman got up and finished the stage. Porte was not so lucky, though.

Chris Froome had double the permitted level of the asthma drug salbutamol in a urine test taken during his victory in the Vuelta in September.

The result is not automatically classified as a positive test – and the 32-year-old has not been suspended – but he must provide a satisfactory explanation for the adverse findings or he faces a ban and the loss of his Vuelta title.

Froome was the first Briton to win the Vuelta a Espana and his success also made him the first cyclist since 1978 to complete the Tour de France and Vuelta double in the same year.

Michele Scarponi, one of the most popular riders in the peloton and famous alongside his riding for his pet parrot, was killed on April after colliding with a van while out training on his bike. The fatal crash happened on a crossroad near his home in central Italy when the 37 year old was returning from a training ride.

Scarponi, who was awarded 2011 Giro d’Italia victory when Alberto Contador was stripped of the title, won the opening stage of the Tour of the Alps, and was slated to lead Astana at the 2017 Giro.

In what would be far from Gianni Moscon’s last brush with controversy, the young Italian racially abused Frenchman Kevin Reza during the Tour of Romandie. Team Sky banned the 23-year-old for six weeks despite Moscon’s claims that “the accusations are not completely founded” and his later insistence that “my conscience is clean”. The UCI took no further action.