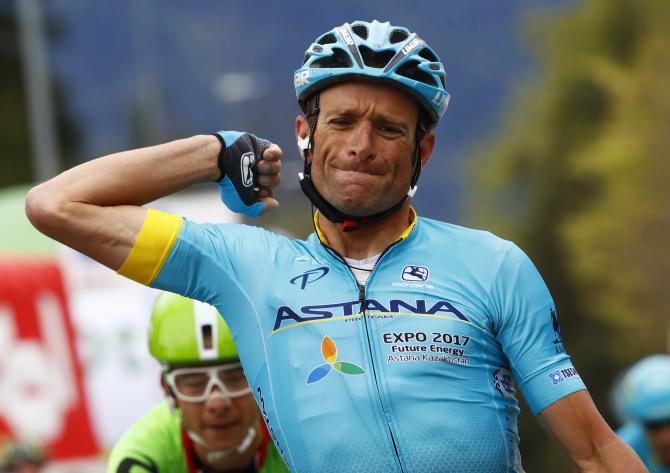 Italian cyclist Michele Scarponi has died aged 37 after being involved in a collision with a van during a training ride.

Scarponi had returned home to Filottrano, in the province of Ancona, after finishing fourth on Friday afternoon in the Tour of the Alps in Trento.

Team Astana announced the rider’s death in a statement on Saturday morning, saying it was a tragedy too big to be written.

Scarponi, who was awarded 2011 Giro d’Italia victory when Alberto Contador was stripped of the title, won last week’s opening stage of the Tour of the Alps, and was slated to lead Astana at the 2017 Giro.

Astana paid tribute to a “great champion and a special guy”. The team statement read: “Michele died in the morning while he was training. This is a tragedy too big to be written.

“Our athlete Michele Scarponi died this morning while he was training on his bike close to his home in Filottrano. Michele has been hit by a van on a crossroad.

“Michele ended 4th in the Tour of Alps yesterday afternoon in Trento. Then he went home in Filottrano (Ancona) by car with his masseur and was home in the evening to his family.

“This morning, Michele went out on his bike for an early-morning training and there the tragedy happened.

“We left a great champion and a special guy, always smiling in every situation. He was a real milestone and a landmark for everyone in the Astana Pro Team.

“The Astana Pro Team clings to the Michele family in this incredibly painful moment of sorrow and mourning.”