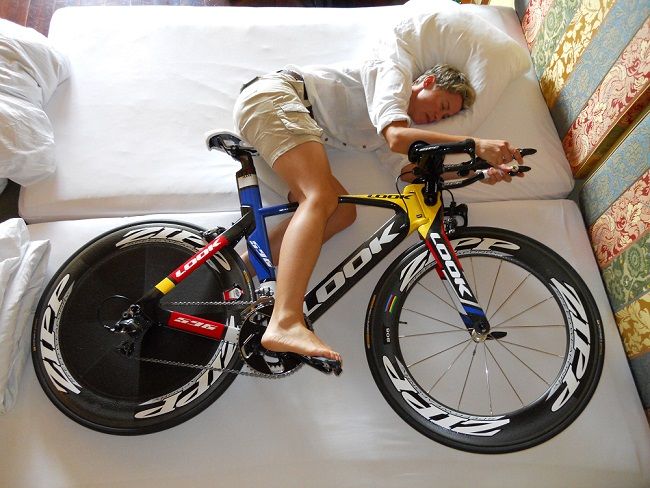 The season of short days, wet and icy roads, coughs, colds and flu is here. What happens to your fitness when unexpected circumstances force a break from training?

More importantly, how you can minimise fitness losses to be better-prepared next spring?

Detraining is what happens when you take a prolonged break from training: you lose fitness. The physiological changes your training stimulated effectively wear off – your body resets itself back to ‘sedentary mode’.

What happens during detraining?

A number of systems in the body are ‘detrained’ once training ceases. These include:

Cardiovascular detraining
Your blood volume falls and, as a direct result, there is a decrease in your cardiac output (amount of blood your heart can pump per minute) and stroke volume (amount of blood it can pump per beat) during exercise. The dimensions of the heart muscle also decrease with inactivity, as does respiratory (lung) function, caused by weakening of the muscles in the ribcage. All of this reduces the amount of oxygen you can transport to your working muscles, which means your maximal performance will decline.

Metabolic detraining
Once you stop training, there’s a comparative increase in the amount of carbohydrate used as fuel during both maximal and sub-maximal exercise, with less energy derived from your fat stores. This effectively decreases your endurance since carbohydrate stores are limited, whereas energy from fat stores is virtually unlimited. Also, something called ‘insulin sensitivity’ is reduced, which means your muscles find it harder to take up glucose (muscle fuel). Moreover, less efficient oxygen metabolism means that, for a given effort level, higher levels of fatiguing blood-lactate are produced in your muscles, making it harder for you to maintain high training intensities.

Muscular detraining
In your cycling muscles, the density of capillaries (tiny blood vessels that carry oxygen to muscles) decreases and the concentration of enzymes in muscle mitochondria (the ‘energy factories’ within cells) used to release energy from oxygen also decreases. Also, muscle fibres shrink in cross section and cell-signalling hormones involved with gaining/maintaining strength decline, leading to strength losses.

In one study, Dutch scientists looked at the effects of three weeks of reduced training volume and intensity on the physical fitness of well-trained cyclists(1). These cyclists normally averaged around 16 hours per week of training. For this study, they were instructed to reduce their training volume by half and simultaneously reduce their training intensities by 20 per cent. Taken together, the combined effect of these changes resulted in a 60 per cent drop in the cyclists’ training load.

Measurements of fitness were taken before and again after the three weeks of detraining. The researchers’ findings surprised them. Basically, there was no drop whatsoever in either the cyclists’ maximum power outputs or their oxygen uptake capacity (an excellent indicator of aerobic fitness). It didn’t matter whether the reduced training load was carried out at constant or variable intensity; the fitness losses were essentially zero in either case.

For cyclists struggling to maintain fitness, especially over the winter months, these findings are encouraging because they suggest that, even if you slash your training load by nearly two-thirds for up to three weeks (for example, during a prolonged cold snap), you can expect to retain nearly all of your hard-earned gains.

One caveat, however, is that, at 16 hours per week, these cyclists’ pre-layoff training loads were reasonably high. If you’re training for only three hours a week to begin with, then reduce your training load by 60 per cent, the chances are that you will lose more fitness than did the cyclists in the study.

In the study, the cyclists cut their training volume by 50 per cent. But what happens when you slash training volumes by much, much more – to around just one-tenth of normal? A fascinating study published recently looked at just this question.

The scientists studied the cardiovascular and body-composition changes following an ultra-distance triathlon in nine recreational triathletes over a 30-day detraining period during which training volume was reduced by 87 per cent (2). They found that after 30 days of detraining, there was a 4.7 per cent decrease in maximum aerobic capacity from 4.83 litres per min to 4.61 litres per minute (L/min).

Meanwhile, skinfold thickness totals (a measure of body-fat levels using calipers) rose a whopping 28 per cent, from an average of 43.9mm to 55.1mm.

The total blood haemoglobin (a measure of oxygen-carrying capacity of the blood) fell by 3.1 per cent, and bodyweight rose from an average of 75.1 to 77.1kg. Taken together, these physiological changes would certainly result in a performance decrease in the average cyclist.

Of particular note in this detraining study was the increase in skinfold thickness, indicating a significant rise in body fat. This phenomenon has also been observed in other sportsmen and women such as swimmers.

However, there’s surprisingly little published research on the actual fitness losses during an extended period of detraining. This is perhaps to be expected; after all, it’s very hard to recruit a group of sportsmen or women who take their training seriously and then ask them to stop training for a month or more while their hard-earned fitness ebbs away!

How to find the right life balance as cyclist 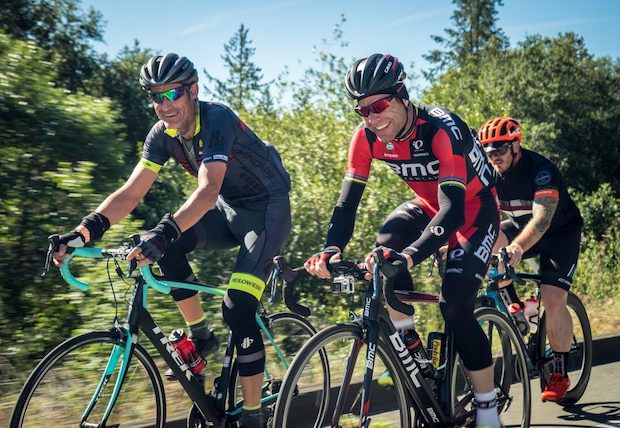