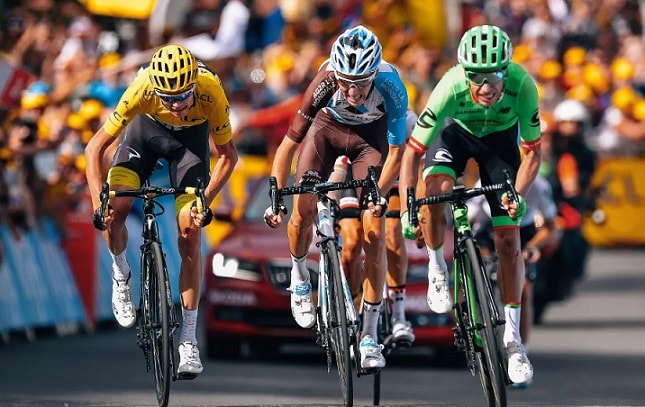 Chris Froome stood firm in the Alps to extend his Tour de France race lead following a showdown on stage 17.

The Brit forced his way into third place across the line in Serre-Chevalier, finishing among an elite group of GC favourites after breaking clear over the top of the famed Col du Galibier.

“I expected it was going to be a bit of a shadow chasing match between the main GC guys and that was my mentality going over the climb today, just to follow the other guys”, said Froome. “Not necessarily doing too much with tomorrow in mind but it’s interesting to see this late in the game some guys struggling out there. Fabio Aru was the most noticeable GC contender who lost a bit of time today. Let’s see. Tomorrow is the last hard, hard stage, a mountain top finish on the Col d’Izoard. It’s still all to race for.

“I didn’t expect Fabio Aru to lose time today. That was probably the surprise of the day, but again I have to thank my team-mates. They emptied themselves today, each and every one of them to make sure I was safe until the final and I’m really, really happy with how the day panned out.

“Izoard is the last big mountain stage for us in this year’s Tour de France but the time trial is certainly something I’m looking forward to on Saturday. It’s something I’ve worked really hard at before coming to this year’s Tour de France. I’ve been up to Marseille and looked at the route already and I think it is a good route for me. I’d be happy going into that time trial with the gaps we have now.”