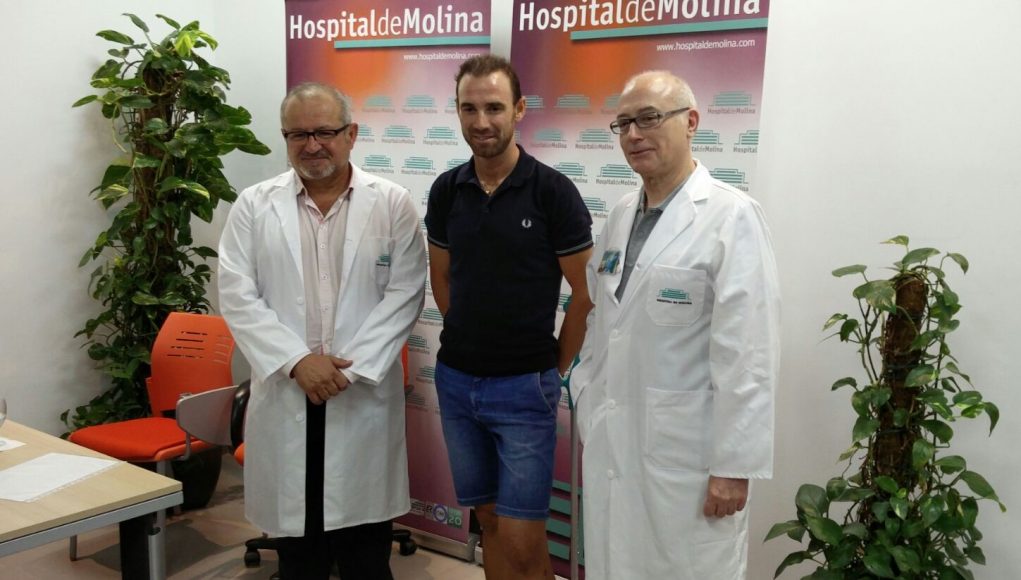 Just over two weeks after the crash that took him out of the 2017 Tour de France during the opening time trial in Düsseldorf, Alejandro Valverde (Movistar Team) spoke to the media at a press conference in the Hospital de Molina, near his home in Murcia.

The Spaniard crashed on a slippy corner in the time-trial and was later diagnosed with a fractured left kneecap, a fractured talus, which is part of the ankle joint in addition to suffering a deep wound to his tibia.

The 37-year-old underwent surgery on his left kneecap at Düsseldorf’s University Hospital before returning back home to Spain.

Joined by Dr. Francisco Esparza, who is following his recovery the closest, and the centre’s main officer Pedro Hernández Jiménez, Valverde explained the current status of his recovery – which is sidelining him for the rest of the 2017 season – and thanked all support he has received all over the world at one of the hardest moments of his professional career.

“I knew it was a serious crash since the very moment I crashed. I couldn’t see the injury to my tibia, because we wear very long overshows, but I could see my knee, and I knew it was really a mess, completely shattered. I thought my sporting career had ended there”, said Valverde.

“However, after the surgery, I started to be aware of what my real injuries were, and realized that the crash was serious, but I had good prospects of full recovery. It will be a long way to cover, we’ll have to put much work on it, but I’m calm because I know I can get to what I was before the crash.”

“The season is over. We have to do things right, not trying to overreact and hurt ourselves. It would be nonsense to try and recover faster than we should. For the time being, we must wait for the kneecap to completely recover – it’s tied to the knee with screws, but still needs to fix itself – and also the talus and calcaneus on my ankle, which are also broken.

“Once we get everything right, and provided that we’re taking all efforts needed to ensure the best mobility on my leg, I’ll be able to get on my bike for very mild efforts. We can’t still talk about any schedules for my full recovery. There will be a time later on to plan on our goals for the next season, once we finish with rehab.

“However, despite not being able to train, I’m really keeping myself fit with this hard process. We spent both the whole morning and afternoon at the hospital, working for as much as we can. There’s no other choice possible: if I want to get back as strong as I was, we must work hard.”

“I want to thank the Hospital de Molina, Dr. Esparza, all of the people working here. Also the Movistar Team, for treating me so well after my crash, and our sponsor Telefónica, for their admiration – I’m really glad to have them by my side. The University Hospital of Düsseldorf, whose attentions were outstanding. I’m feeling good, even if it’s hard and painful.

“I’m upbeat, ready to keep fighting, and all of the work we’re doing is the best to return as soon as possible, though always considering it’s a long recovery. I’m also very thankful towards the fans all over the world. It was amazing to see people from so many places sending me their support, and also colleagues from the whole peloton asking myself and my team-mates about how I was doing. Support like this makes everything quite easier. I must get well for them and fight to get back to the place I was before the crash.”