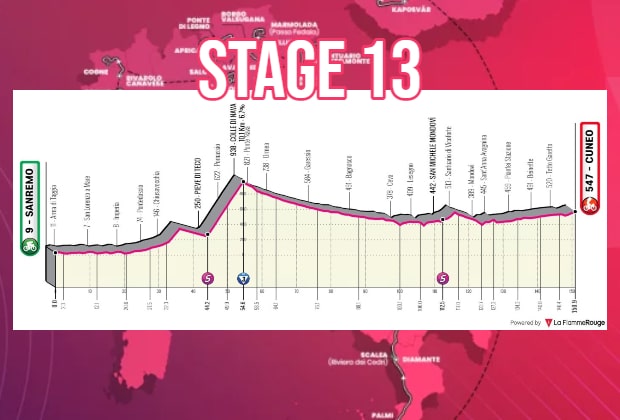 This could be again be a stage for grab for the sprinters that pass climbs fairly well, but seeing how serious the peloton behaved itself, the right breakaway guys could indeed make it. Another stalemate till the finish could also be in the book “yawn”.

25 km after leaving San Remo, climbing starts up until the Colle Di Nava at km 54, and then it just descending and flat.

Will some good climbers who are very late in general classification try to go for a long escape? Why not. Riders like Harm Vanhoucke, Magnus Cort, Natnael Tesfatsion, David de la Cruz, Alessandro de Marchi have nothing to lose, but it’s a long job, and there are some hard stages coming. If they hope a win, they have to try. In case of a cool start, we will see the sprinters for a final bunch sprint… So very difficult to predict, everything is possible.

The ideal scenario would be an early break away with Tagliani ticking the intermediate sprint. As the climb starts, the likes of EF-Education or even AG2R or EOLO could harden things to distance the likes of Cavendish and Demare and to keep the pace high until the finish and to deliver the like of Magnus Cort, Vendrame or Albanese to the finish.

This could be that or it could be infinite attempts to escape until the start of the Colle de Nava where a breakaway will form only for it to be caught in the 100 km after the only categorised climb of the day has been passed and we would get another bunch sprint. Fernando Gaviria is probably the hungriest man right now.