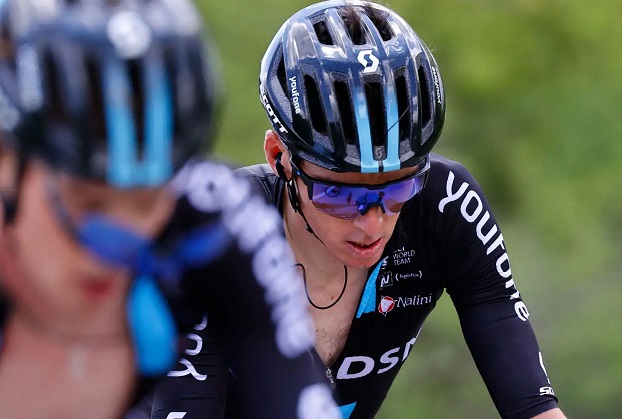 After showing strong form at the Giro d’Italia, Romain Bardet pulled out during the 13th stage on Friday complaining of feeling sick.

The 31-year-old DSM man was fourth place in the standings going into the mountainous final week of the 21-day race where he would likely have thrived.

Along with Richard Carapaz and Mikel Landa, Bardet was a credible pretender to win this Giro after his victory in the Tour of the Alps in the lead up.

“It’s a real shame,” said DSM team director Matt Winston. “Yesterday, after about 10 kilometers of the stage, he started to be sick. We sort of carried him through the stage yesterday and looked after him as best as possible.

“But last night, it didn’t get any better. He couldn’t eat yesterday evening and he was awake most of the night with illness, so we were already a little bit in doubt this morning about how it would go and whether he would be able to start today,” Winston continued.

“In the end, we gave it a go, but it just wasn’t possible. Romain just wasn’t in good enough shape physically to continue.”

A former runner-up on the Tour de France and the World Championships, Bardet said earlier this week that one bad day in a race like the Giro can wreck your chances.

“There will be hazards every day this week, you have to keep your wits about you,” he said. “I’ve been through many highs and lows on the grand tours.”

On the bright side Bardet can now take his strong showing from the Giro into the Tour de France in five weeks time.