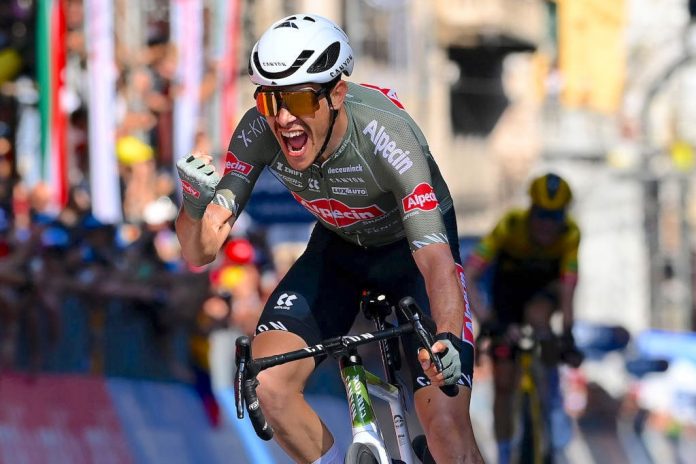 Stefano Oldani made it two stage wins in a row for the hosts as he sprinted to victory on stage 12 of the Giro d’Italia in Genoa on Thursday.

You can rewatch STAGE 12 HERE

Oldani was too fast for compatriot Lorenzo Rota and Gijs Leemreize over the final 100m after a long breakaway on the longest stage of the race over 204km from Parma.

For Oldani this was a first professional win on a day when he joined the breakaway group to help his Alpecin team leader Mathieu van der Poel.

“When I realised that I’d won a stage on the Giro there was a wave of emotion that I couldn’t hold back,” said the 24-year-old. “I wanted it so badly.”

The race was conducted at breakneck speed with 53km covered in the first hour, the winner crossing the finish line 30 minutes ahead of even the fastest prediction.

Juan Pedro Lopez held the race lead for a ninth day in the pink jersey thanks to the Spaniard’s win on an escape to Mount Etna on stage 4.

“Luckily the weather conditions are my favourites, like at my home in south of Spain,” Lopez said after a sizzling day in the saddle. “Nine days in the Maglia Rosa is a lot! But I wouldn’t mind some more.”

It was an astonishing day for Wilco Kelderman too as the Dutchman dragged himself back into the overall reckoning by gaining eight minutes as part of the escape to make up for his meltdown on the Blockhaus mountain last Sunday.

Caleb Ewan left the Giro empty handed Thursday when he became the 14th rider so far to drop out. Ewan fell on day one and failed to add to his five stage wins here on previous editions.

On Thursday, the Giro remembered Wouter Weylandt as it crossed the Apennine Mountains after he died on the race on the descent of the Passo del Bocco in 2011.