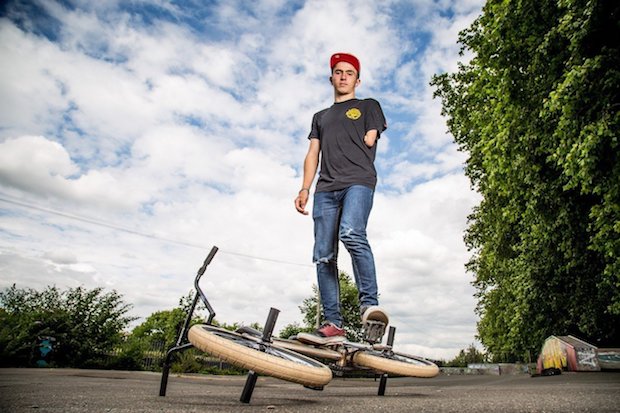 Jack Dumper is a BMX enthusiast and has learned how to perform a series of jaw-dropping two wheeled tricks – despite only having one arm.


The 19-year-old from Bristol, U.K., was born with no lower left arm due to natural causes but that doesn’t stop him from performing daring stunts on his bike.

He simply ties his left sweatshirt sleeve to the left handlebar for stability and pulls off tricks just like his peers. “I’ve always tried to keep a positive attitude towards it,” the Dumper said. “It’s never held me back, so I’ve just embraced it.”

Dumper began riding BMX about 4 years ago after “loving the look of the sport” but never taking part.

“I just jumped straight in and threw myself at every obstacle,” he said, revealing that pulling moves felt more “natural” after figuring out the sleeve trick.

“Don’t let anything stop you or anyone tell you that you can’t do it, because you can do anything that you set your mind to. You just need to find a way of doing it that works for you, as the only thing in your way is yourself.”