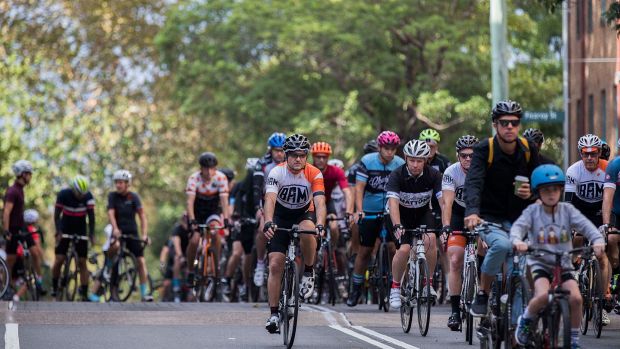 Tributes for Mike Hall were held all across Australia on Sunday with heartbroken cyclists riding in memory of the ultra-endurance legend killed on Friday morning.

In Sydney, a contingent of several hundreds cyclists gathered in Surry Hills shortly after daybreak, before riding together to the Opera House – the designated end of the race.

Mike Hall’s mother, Patricia Hall took to Facebook to thank the organisers of the memorial ride for the “fitting tribute” to her son.

“This is such a fitting tribute to Mike I will be thinking of you all around the world riding with my son in your heart,” she wrote. “I have not realised the great impact my son had on this sport how well loved he is and want to you to know I do so appreciate everything Jesse and Kristoff have done. Mike will be riding up front with you all.”

Rides also took place in other cities across Australia, with the race capturing the public’s imagination since the 70 competitors left Fremantle, Western Australia a fortnight ago. Among them were Adelaide and Melbourne, both of which Hall past through in the days before his death.