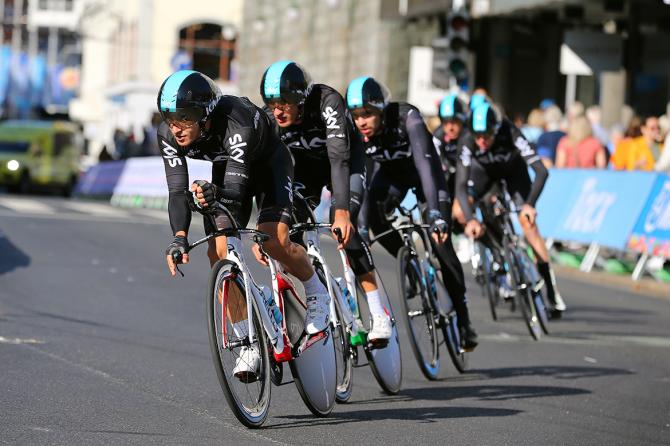 Team Sky have arrived in Bergen, Norway, ahead of the Sunday’s World Team Time Trial Championship and Sport Director Brett Lancaster is confident of their chances of winning gold.

The fourth rider across the line will stop the clock after 42.5km of undulating terrain and a testing climb just before the 30km mark, with 1.4km at an average gradient of 7.4%.

The British team will be looking to improve on a previous best finish of 3rd in the 2013 edition in Florence. The Team Sky squad for Sunday’s race is Owain Doull, Chris Froome, Michal Kwiatkowski, Vasil Kiryienka, Gianni Moscon and Geraint Thomas.

“When it comes to selection, it’s definitely a case of horses for courses”, Sports Director Brett Lancaster said. “We’ve been out and had a look at it and this is a route which suits our guys. It’s probably the most amount of climbing there has been in a Worlds TTT since it was reintroduced in 2012, and we’ve been able to put together a group for this course which means that we’re in with a good shot.”

“It’s pretty long for a TTT. You’ll certainly see teams losing riders before the end and before the last climb. It will be case of looking at how to best utilise each member of the group so that their effort makes the maximum contribution to the team result. That might mean using people early on and not necessarily expecting them to be part of the group that makes the finish line together. That will be part of the thinking each team has to do”.

“In a perfectly drilled TTT there are no heroes. It’s all about how your effort contributes to the overall result and how it affects the other members of your team.”

“It’s all about balance – the group moving forward and all together. There is no point having one or two really strong riders on the day who are ripping the legs off everyone else. Everyone has to be disciplined and riding for the team”.