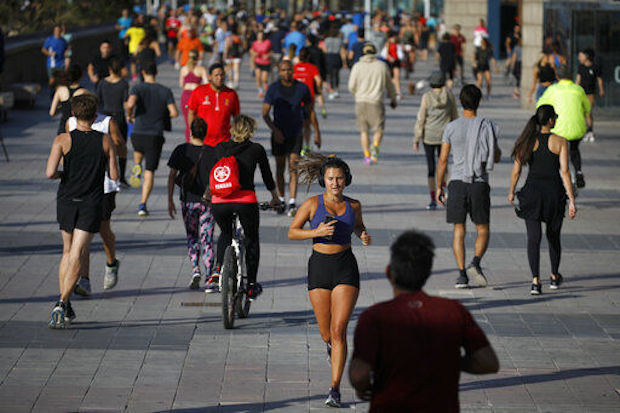 (Reuters) – Joggers, cyclists and surfers across Spain hurried out of their homes on Saturday, allowed to exercise outdoors for the first time in seven weeks as the government began easing tough coronavirus restrictions.

In Madrid, cyclists and skateboarders streamed along the city’s wide boulevards. Barcelona’s beachside was packed with runners, while surfers and paddle-boarders were out enjoying the waves.

“We are reaping the rewards of the sacrifices we have made during these long weeks,” Prime Minister Pedro Sanchez said, but stressed that as the country opens up people will need to show self-control and personal responsibility to minimize the risk of any resurgence.

“Until we have a vaccine there will be new outbreaks. The most important thing is making sure these outbreaks do not put pressure on our national health system,” he told a news conference, adding it will be mandatory to wear masks on public transport from Monday.

Hit by one of the world’s worst COVID-19 outbreaks, Spain imposed a strict lockdown in March, confining most of the population to their homes for all but essential trips.

Sports and recreational walks were banned.

Charlotte Fraser-Prynne, 41, a British government affairs consultant, was among the first to savour the new freedom to exercise – out for an early morning run near Madrid’s Retiro Park, which remains shut.

“I have been looking forward to this for weeks. I was joking with my friends that I would be the first out in Madrid,” she said.

Health emergency chief Fernando Simon said parks would be opened “when the time is right”. He told a news conference that the idea behind the latest easing was for people to exercise, not to socialise in groups.

As the rate of infection has fallen and hospitals have regained their footing, Sanchez’s government has shifted its focus towards gradually reopening the country and reviving a badly battered economy.

Sanchez said his government would approve a 16 billion euros ($17.57 billion) reconstruction fund to help regional authorities rebuild in the wake of the pandemic.

The prime minister announced a four-phase plan this week to return the country to what he termed “the new normality” by the end of June.

Last weekend, children under 14 were allowed out for an hour a day of supervised activity.