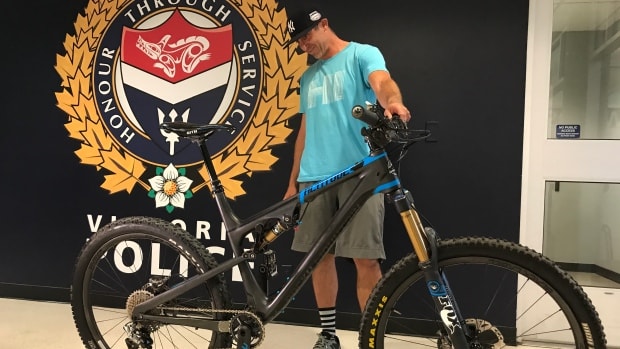 A $11,000 custom mountain bike stolen from a couple who were honeymooning in Victoria, Canada, was recovered by Victoria police and returned to the owner.

The couple from California were on a summer road trip having travelled through Utah, Wyoming and Montana before entering the Rockies on their way to Vancouver Island.

“We parked on Government Street thinking it was a real busy street where our van would be safe. We had four bikes on the back and our huge surfboards up there,” he told CBC News.

While the couple walked around and ate dinner, someone made off with one of the bikes on the rack — a Rocky Mountain Thunderbolt bike valued at $11,000.

“The Kryptonite cable that was holding all our bikes was cut and this one bike — probably the most valuable bike on the rack — was taken”.

We need your help finding a bike. This bike was stolen last night from some tourists visiting #yyj on their honeymoon. Value: $11,000. pic.twitter.com/TcncbGEAg8

Police found the bike while conducting an unrelated search warrant in the 500 block of Sumas Street. Four other bicycles, drugs, an electric scooter, bike frames and bike parts were also found during the search and one person was taken into custody.