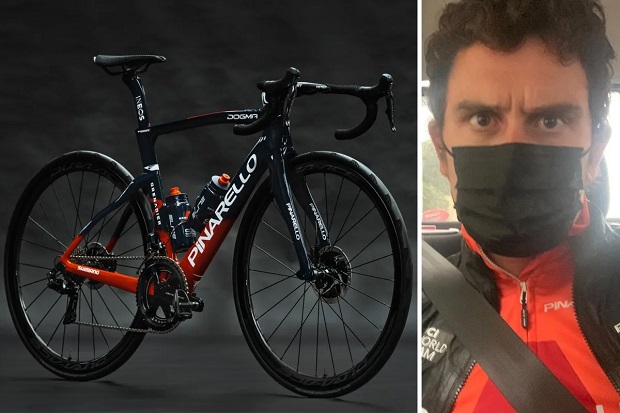 The 2018 Tour de France champion Geraint Thomas suffered that sinking feeling so many other cyclists know so well, stepping out of a cafe to find his bike had been stolen on Sunday.

Thomas was out on a training session on the French Riviera when he interrupted his idyllic ride for a pit stop at a cafe in pretty seaside town Menton, near his Monaco base.

The double Olympic gold medallist was then forced to take a long taxi ride home, from where he took to Twitter to announce his misfortune.

“Lovely ride. Lovely coffee stop in Menton. Except someone nicked my bike Now in an Uber home,” Thomas posted along with a selfie, wearing an expression of mock-rage.

“It’s a Dogma F with F12 stickers. Random miss matched wheels and in need of a wash #oneofakind.”

The British rider later posted a photo showing three police officers at his door with his bike.

“Look what showed up!” Thomas said. “Boy have I got a good story for you on next week’s pod. Big thanks to the Menton Police for their help. All’s well that ends well.”

Look what showed up!! Boy have I got a good story for you on next week’s @gtcc_ pod 🤣 Big thanks to the Menton Police for their help 👮‍♂️👌 All’s well that ends well pic.twitter.com/qW5x8qXnbt