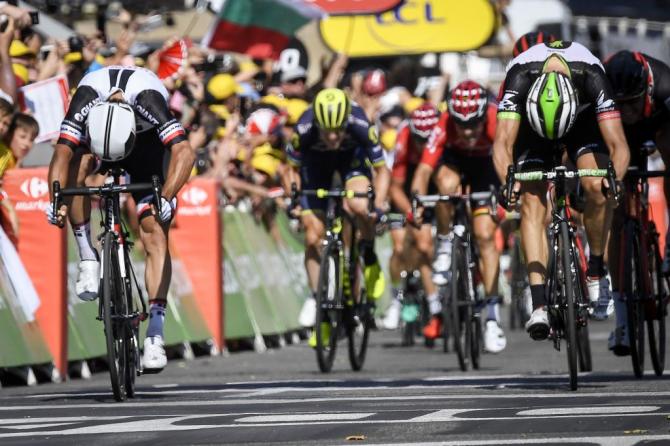 Michael Matthews (Team Sunweb) has won a sprint to the line on Stage 16 of the Tour de France as Chris Froome (Team Sky) kept the race leader’s yellow jersey ahead of two difficult days in the Alps.

Heavy crosswinds played havoc in the last 30 kilometers of the 165-kilometer ride between Le Puy-en-Velay to Romans-en-Isere, causing the peloton to stretch and frequently break into several groups.

Froome and his main rivals — Fabio Aru, Romain Bardet and Rigoberto Uran — managed to stay at the front and crossed the finish line together.

Sunweb rode hard in the first climb of the day as Marcel Kittel was dropped, making sure he would not come back, and they collected their third win in four stages after Matthews won stage 14 and Frenchman Warren Barguil prevailed on stage 13.

Matthews collected points in the intermediate sprint and at the finish to narrow the gap with Kittel to 29, setting up a duel with the Quick-Step Floors rider in the final days of the race.

“It had been the same guy every year for five years (Peter Sagan), now this is going to be exciting,” said Matthews, who outsprinted Edvald Boasson Hagen and John Degenkolb.

Degenkolb complained that Matthews did not hold his line in the sprint, but the Australian was adamant he raced fairly.

“I saw the sprint on TV afterwards. I sprinted in the same direction, I did not change my line. I left a space between me and the barrier,” Matthews said, adding that Degenkolb had grabbed him by the neck after the finish.

“He grabbed me by the neck. The officials saw that, I don’t know what they’re going to do about it. I don’t think it’s very sportsmanlike.”

It was a bad day for Quick-Step Floors as Dan Martin, who started the day in fifth place overall, lost 51 seconds after a late peloton split as crosswinds swept the roads in the Rhone valley.

Martin slipped to seventh, 2:03 behind race leader Chris Froome, who retained the yellow jersey after his Team Sky’s brutal acceleration 14km from the line caused the decisive split in the peloton.