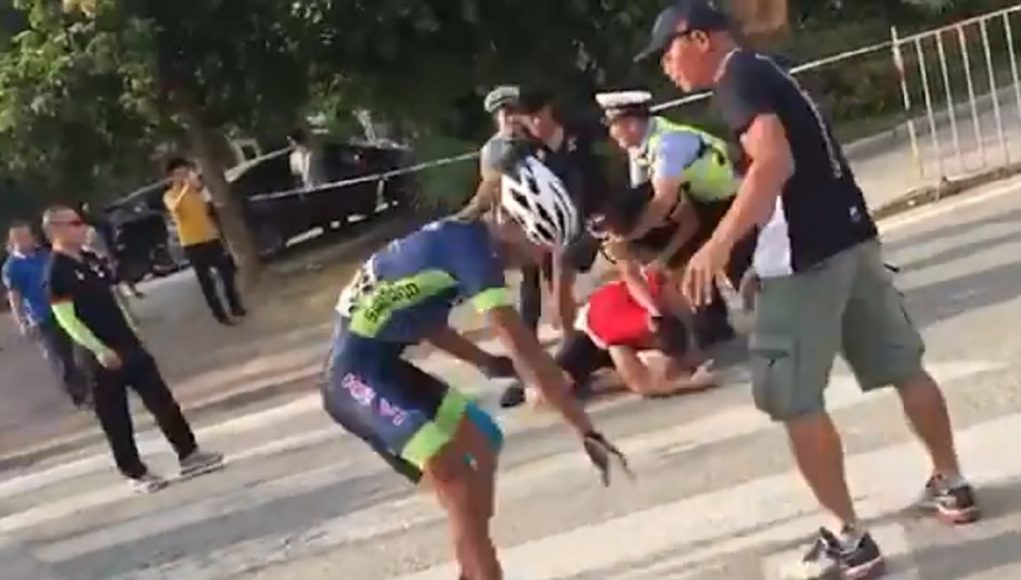 (AFP) – The Chinese rider kicked out of the Tour of Hainan for attacking Swiss national team staff has been banned from professional cycling for two years, Chinese cycling chiefs said.

Wang Xin, his Keyi Look team and three of their staff were punished for what the Chinese Cycling Association (CCA) called the “violent incident”.

Race organisers on the southern Chinese island had already said that Wang and Keyi Look would never be allowed back and now the CCA has taken further action following the extraordinary scenes that saw Wang at one point grab a bicycle pump as a weapon.

Video footage posted online shows a rider, purported to be Wang, beating one staff member of the Swiss team to the ground and kicking him in the head, before attacking a second one, following the tour’s seventh stage on Friday.

Police and bystanders rush in to intervene, as dozens of people look on in shock.

Wang, who later apologised on social media, was enraged after accusing the Swiss team’s car of knocking him off his bike during the stage between the cities of Sanya and Wuzhishan, a claim that was denied by the Swiss team manager Danilo Hondo.

In a statement issued late Wednesday, the CCA said that Wang and the Swiss car had bumped one another, causing him to fall.

But it said that was no excuse for Wang’s reaction and excluded him from all cycling for six months, with a two-year ban from professional-level cycling.

Keyi Look are barred from all events until 2019 and the CCA also dished out punishments of varying degrees to team manager Han Feng, doctor Zhang Ya and masseur Fan Yunlong.

Han was not involved in the attack, the CCA said, but accused him of failing to control his employees.