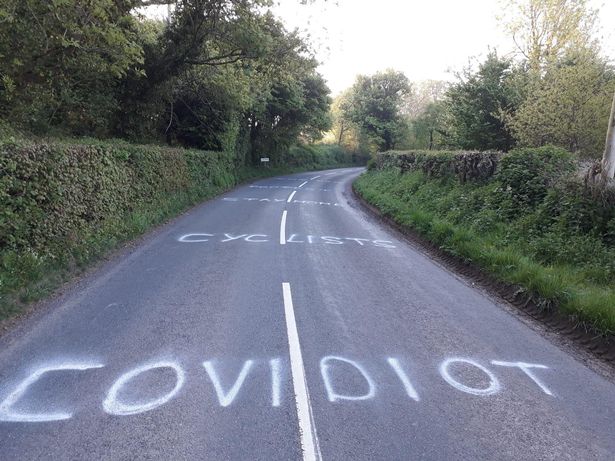 “Covidiot cyclists stay at home protect the NHS” messages were painted on roads in United Kingdom as number of attacks cyclists have had received during the coronavirus lockdown keeps growing.

The chief of a Somerset cycling club says he is shocked by the number of attacks cyclists have had received lately, adding that some of the riders have received abuse from passing cars and pins have purposely been placed on roads.

“As chairman of our local cycling club I have been shocked by the number of attacks on cyclists in our area over the last few days”, says Mark Jerzak of Chew Valley Cycling Club.

“Since the start of the coronavirus outbreak, our club has cancelled all club activities, banned group rides and advised our members to follow the government guidelines on exercise.

The “Covidiot” message was removed by locals today as one of the cyclists said on social media:

“This is not who we are. Once we knew this had been done outside our village a small workforce turned up to scrub this off the road. The irony being that in targeting cyclists doing nothing wrong you made a bunch of us have to get together to scrub this hate off the road.”