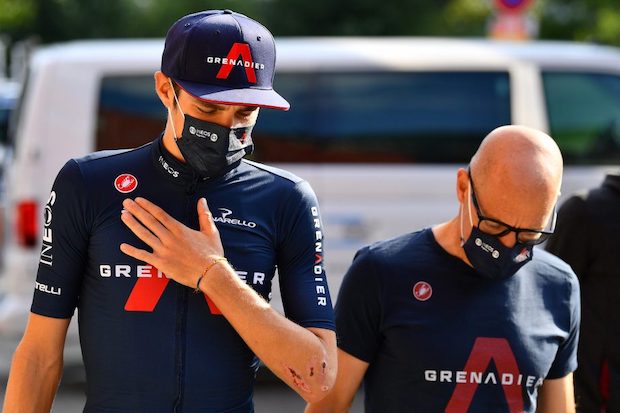 (Reuters) – Bradley Wiggins says his old boss Dave Brailsford would be facing the sack if he were a football manager after a poor Tour de France so far for Ineos Grenadiers.

Brailsford has masterminded his team’s domination of the race over the past decade since Wiggins became the first British man to win the Tour in 2012.

Chris Froome has won four times, Geraint Thomas once and last year Egan Bernal claimed the overall jersey in the team’s first season as Ineos rather than Team Sky.

Froome and Thomas were both left off the Ineos Grenadiers team for this year’s race and Bernal blew up on the Col du Grand Colombier on Sunday, losing eight minutes on the leaders to all but end his challenge for the yellow jersey.

“It’s hard to stay on top every year and this year they’ve just not got it right,” Wiggins told Eurosport.

“I don’t know what’s happened there. For a team that’s performance orientated and such planning that goes into their seasons, it’s just not worked for them for one reason or another. Had it been football, Dave would be out.”

Wiggins said it would be dangerous to assume Brailsford’s once all-conquering outfit were in terminal decline though.

“Dave has been here before and they’ll restructure and re-plan and come back next year with a full line-up. With the world going back to normal, that will help,” he said.

Wiggins said uncertainty about the fitness and form of Froome and Thomas had clouded the Ineos strategy.

“(Jumbo Visma) was selected last December and it was Primoz Roglic as leader as the winner of the Vuelta. I think that’s maybe the tightrope Ineos walk sometimes with having so many big leaders. There’s extra competition within that team for who will take the leadership mantle.”