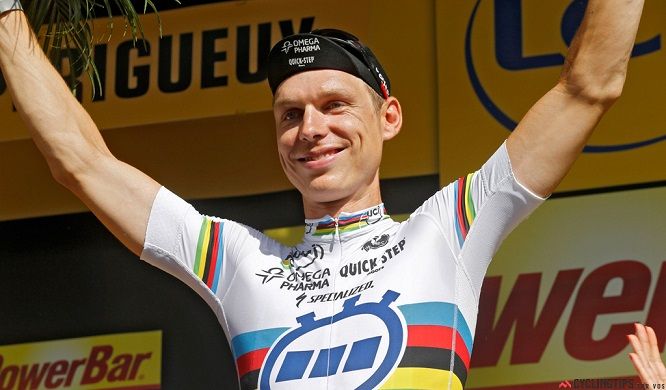 Tony Martin says he believes something is amiss with the UCI’s handling of the Chris Froome case.

The four-time world champion believes it is unacceptable that Froome was allowed to keep racing after he had an adverse analytical finding for salbutamol.

”I am totally angry,” the German cyclist wrote on Facebook . ”There is definitely a double standard being applied in the Christopher Froome case. Other athletes are suspended immediately after a positive test. He and his team are given time by the UCI to explain it all. I do not know of any similar case in the recent past. That is a scandal, and he should at least not have been allowed to appear in the World Championships.

”Not only the public but also I have immediately the impression that there is wheeling and dealing going on behind the scenes, agreements are being made and ways are being sought as to how to get out of this case. Do he and his team enjoy a special status?”

The UCI did not immediately respond to a request for comment about its actions, which Martin denounced as a ”major blow to the difficult anti-doping fight.”

”We need a (consistent) and transparent approach by the UCI,” Martin wrote. ”What is going on here is (inconsistent), not transparent, unprofessional and unfair. Our credibility is at stake!”

Sky said Froome had to take an increased dosage of salbutamol without exceeding the permissible dose after experiencing ”acute asthma symptoms” during the final week of the Vuelta.

Salbutamol helps expand lung capacity and can be used as a performance-enhancing drug to increase endurance. Commonly marketed as Ventolin, salbutamol is classified as a beta-2 agonist and WADA allows it to be taken through inhalation only, in limited amounts.

”It’s sad seeing the misconceptions that are out there about athletes & salbutamol use,” Froome wrote on Twitter . ”My hope is that this doesn’t prevent asthmatic athletes from using their inhalers in emergency situations for fear of being judged. It is not something to be ashamed of.”