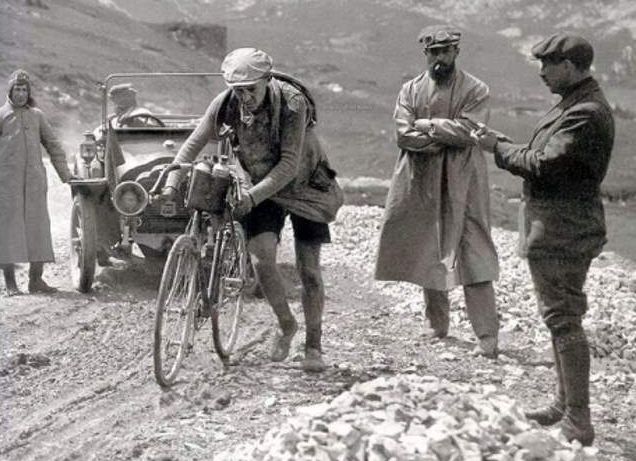 Alphonse Steinès desperately wanted to expand the Tour de France and make it even more monumental, so for the 1910 edition he badgered Henri Desgrange into including the first modern high mountain stage.

Desgrange, ever the fearful boss of the Tour, was reluctant to include a challenge that might be beyond the racers. Even though that first climb in 1905 had been successful and tougher climbs than the Ballon d’Alsace had been included in subsequent editions, the Pyrenees were another matter again. These were mountains!

With 2 months to go to the start of the 1910 Tour, Desgrange sent Steinès to the Pyrenees to see if indeed, it was practical for the riders to climb the mountains in the Tour de France. His reconnaissance trip was very eventful. Ascending the Tourmalet his car was stopped on the mountain by a snowdrift. Abandoning the car, he set off on foot and lost his way on the snowy mountain at night. He finally fell off a ledge of snow into a ravine. The locals who set out to find the missing scout found him at 3 A.M. Steinès sent the following famous telegram to Desgrange: “No trouble crossing Tourmalet. Roads satisfactory. No problem for cyclists. Steinès”

Desgrange was sucked in. He announced in L’Auto that the 1910 Tour route would include ascents of the Peyresourde, Aspin, Tourmalet and Aubisque mountains. It would be 4,737 kilometers long and divided into 15 stages. The penultimate stage from Brest to Caen would be the longest, at 424 kilometers.

Stage 9 took the racers into the Pyrenées with some smaller climbs. Then came stage 10 – the big one. Before it Steines briefed the riders. He told them not to take risks, and that the time limit that had been introduced, whereby a rider had to finish a stage within a percentage of the winner’s time, would be suspended.

The stage was 326 kilometres long between Luchon and Bayonne, and it had to start at 3.30 a.m. to ensure that there would only be a few tail-enders out on the mountains after dark. Battle raged between Octave Lapize and his team-mate, Gustave Garrigou, who won a 100-franc prize for climbing the Tourmalet without once getting off to walk. The two were well ahead at the top, which made what happened next look bizarre. 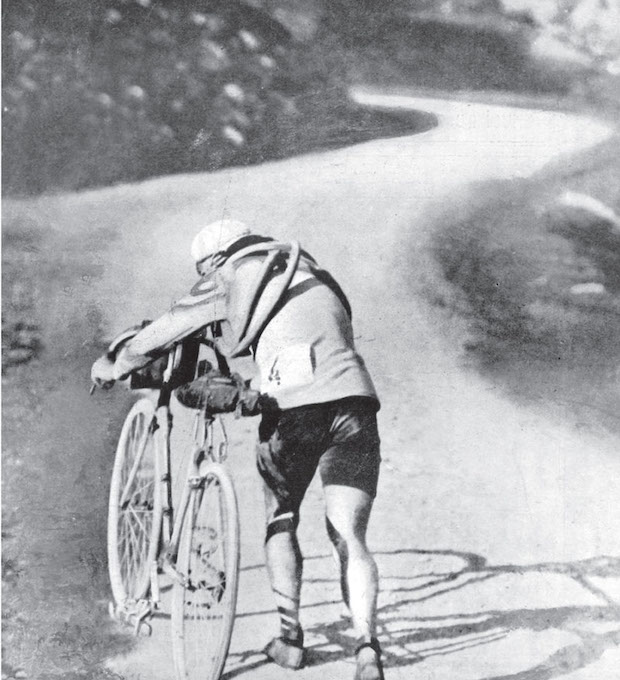 Alphonse Steines and a colleague, Victor Breyer, waited on top of the last climb, the Aubisque. They were expecting to see Lapize and Garrigou leading, instead an almost unknown rider, François Lafoucarde, wobbled into view. Breyer ran into the road and asked Lafoucarde what had happened – where were the others? He didn’t reply but just plodded past, staring straight ahead. Quarter of an hour later the next rider was more vocal. It was Lapize. Exhausted, half stumbling, half pushing his bike, he looked at Steines and Breyer and spat out the word ‘Assassins’.

He caught Lafoucarde, went straight past him, and won the stage. There were 150 kilometres still to ride from the top of the Aubisque, but from the way Lafoucarde dropped down the order, and the fact that he had been nowhere in contention on the Tourmalet, you can’t help feeling that he must have had assistance in a motor vehicle to leapfrog into the lead. Lapize rightfully took all the glory and the stage – while still complaining about the brutality of the route – and went on to dominate the rest of the race to win the 1910 Tour.

Everyone raved about how the magnificent men on their pedalling machines had tamed the wild mountains. France wanted more, so in 1911 the Tour gave them more. This time it was the Alps, the real Alps and the mighty Col de Galibier on a classic stage that included the Col d’Aravis and the stepping-stone to the Galibier, the Col de Telegraphe.