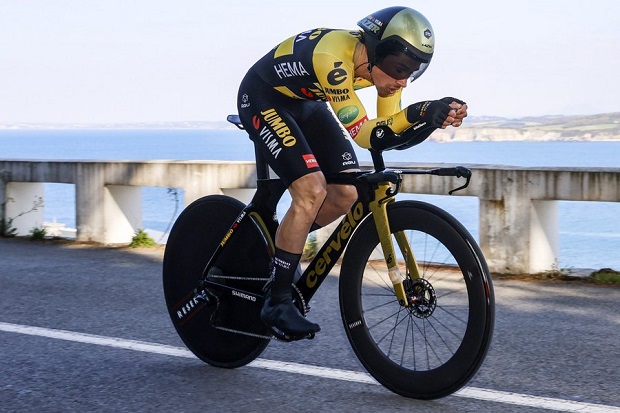 Primoz Roglic won the opening day time trial around the coastal town of Hondarribia in the Tour of the Basque Country on Monday.

Wearing the gold helmet and riding a gold-trimmed bike he is entitled to as Olympic champion, Roglic took just 9min 48sec to complete the hilly 7.5km circuit, with the crowds cheering him up the final stretch on a cobbled hill as the clock ticked down.

Remco Evenepoel was second at just 5s and his teammate Remi Cavagna third, another 11s off the pace.

“It’s always nice to have a lead even if that doesn’t mean much,” said Roglic.

“It’s like the Tirreno-Adriatico, it’s sickening to come second on the first day of a World Tour race,” said Evenepoel.

Ineos pair Geraint Thomas and Adam Yates were also in the mix in fourth and fifth, a couple of seconds further back.

Tuesday’s second of six stages is a largely flat run from Leitza to Viana, although there are three small climbs to pass.