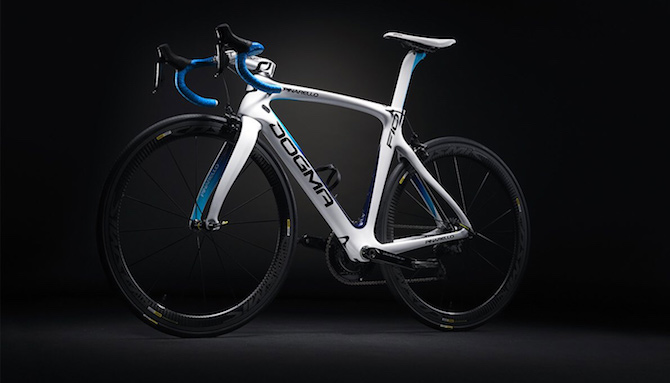 You could also choose for a Team Sky 2018 scheme and four continuous colours: Black Lava, Sideral White, Black on Black and Red Magma.

The F10 is the machine you’re likely to spot under Team Sky riders on practically any terrain, with the exception of the harshest cobbled Classics, where the K8 remains the extra-compliant bike of choice. The frame is made from Torayca T1100 1K carbon fibre, which Pinarello claim has the highest tensile strength in the world installed on a bike. The concave design has the dual purpose of allowing the bottle cage to sit inside the recess, smoothing airflow around it, as well as housing a Di2 junction box if electronic shifting is your thing. Pinarello claims that there’s a 12.6 percent aero gain over the F8, contributing to a 3–4 percent overall gain in aero performance. They claim the frame’s weight has dropped from 875g (53cm) on the F8 to an impressive 830g for the F10. 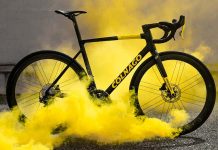