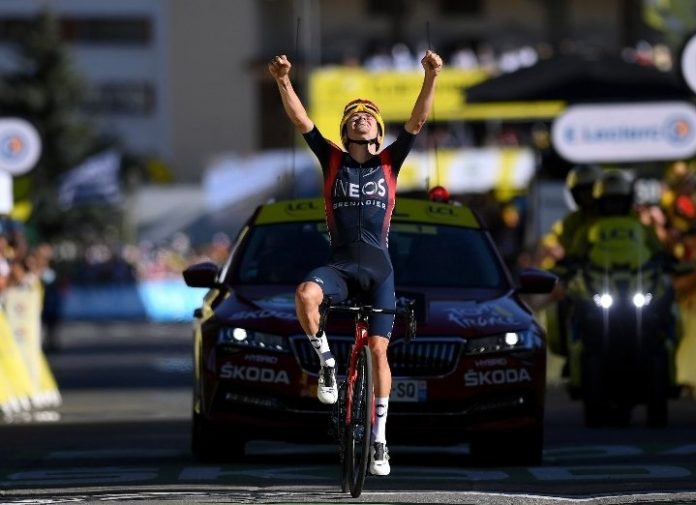 Tom Pidcock added an iconic Tour de France stage win to his impressive CV when he claimed victory at L’Alpe d’Huez at the end of a long solo ascent on Thursday.

You can rewatch STAGE 12 HERE

The cyclocross world champion and Olympic gold medallist in cross country mountain biking attacked from the day’s breakaway with more than 10km left in the final climb, a 13.8-km effort at 8.1% and never looked back.

“It’s one of the best experiences in my life,” said Pidcock after the 12th stage.

Fending off a sea of fans, flags and flares, Pidcock finished ahead of Louis Meintjes and four-time Tour winner Chris Froome, who enjoyed his best day on a bike since a career-threatening crash in 2019.

“You just have to pray that they move out of your way,” Pidcock said of the tens of thousands of fans on the climb. “The idea today was to get me into the break and win the stage. So, box ticked, I guess.”

Overall leader Jonas Vingegaard came under attack from defending champion Tadej Pogacar in the finale, but it was too little, too late by the Slovenian, who lost his yellow jersey on Wednesday when he cracked in the final ascent to the Col du Granon.

Vingegaard leads Pogacar by two minutes and 22 seconds as the 23-year-old leapfrogged Romain Bardet into second overall after the Frenchman lost touch in the last kilometres.

Pidcock’s team leader Geraint Thomas, the previous winner at L’Alpe d’Huez in 2018, finished with Vingegaard and Pogacar and sits in third place overall, 2:26 off the pace.

Bardet slipped down to fourth, a further nine seconds adrift.