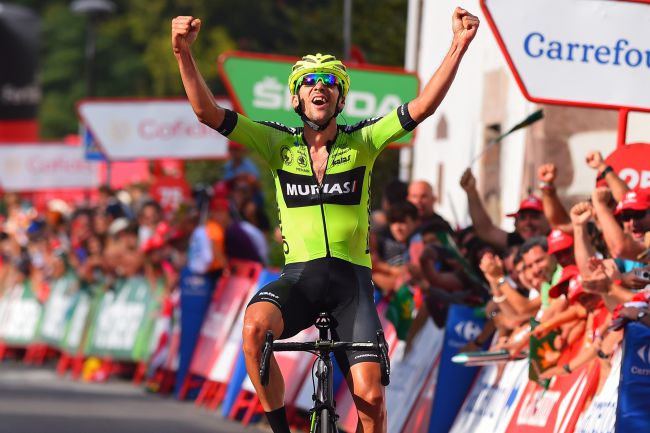 Mikel Iturria couldn’t have asked for a better setting for his first professional cycling win. Just a few kilometers from home, Iturria used a solo breakaway to win the 11th stage of the Vuelta.

”To win it the Vuelta, close to home and with my family here, is a dream come true,” the Spaniard said. ”Before the race I was asked which stage I wanted to win, and I said this was the one. I gave all I had. I was going as fast as I could, finding strength that I didn’t know I had, and was able to make it to the end and win the stage.”

Iturria held on for the victory after making an impressive solo run with about 25 kilometers to go of the 180-kilometer ride from Saint-Palais to Urdax in Spain’s Basque Country.

Iturria finished six seconds ahead of the first group of chasers. He had built a gap of nearly 50 seconds with about 15 kilometers to go.

”I don’t have words for this,” the Basque Country rider said. ”We’ll have to toast with champagne tonight.”

”It was a bit of a hard start but then it was a nice day and my team did a great job,” said Roglic. ”We’ve proven this is a big team already. I don’t think tomorrow’s stage is more dangerous than the high mountains. I don’t have any problem with short climbs. We need to be focused on the moment and do our best.”

On Thursday, riders will face three difficult short climbs near the end of a 171-kilometer stage that will finish in Bilbao.