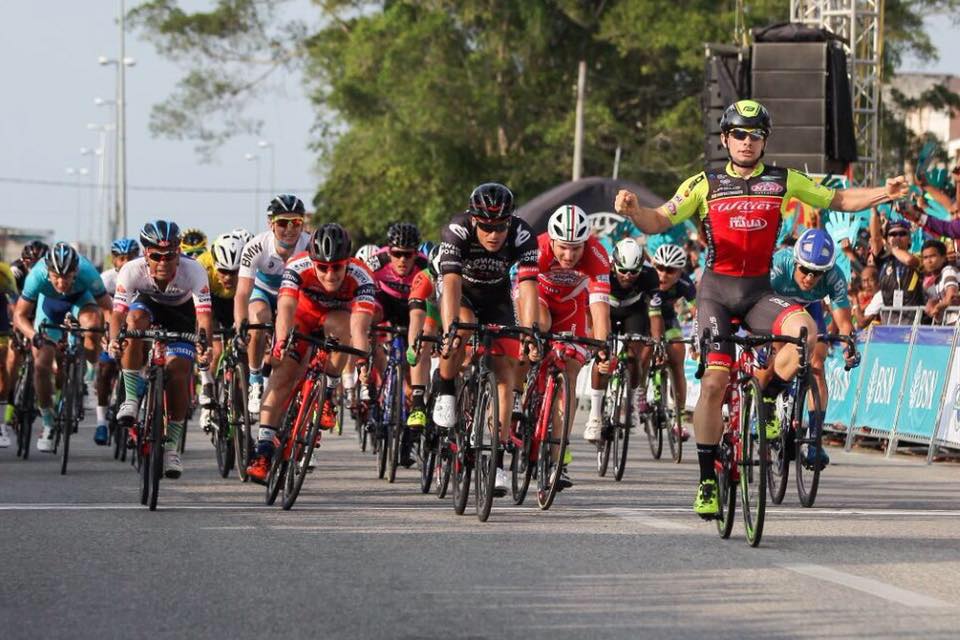 Jakub Mareczko gave Wilier Triestina their first victory of the 2017 season in stage 3 of Tour de Langkawi at Pantai Remis. The Italian outsprinted stage 1 winner Scott Sunderland who moved into the lead of the points classification whereas Ryan Gibbons of South Africa retained the yellow jersey ahead of the queen stage to the Cameron Highlands.

“Finally I broke the ice”, Mareczko commented. “The whole team was dedicated to bring me to victory. I’m grateful to my team-mates for that. Pozzato, [Alberto] Cecchin and [Rafael] Andriato dragged me to the first positions of the peloton and I could launch my sprint with 400 metres to go.”

Mareczko won by a length of a bike over Sunderland. “It was difficult with a lot of people moving up all the time ahead of the sprint as everyone was fresh”, the Australian explained. “I’ve started my sprint from a long way back as I was out of position. I came from 25th wheel at 300m to go while he [Mareczko] was third wheel with 200m to go. His team here is built around him while mine has four guys out of six who are strong in the climbs. They have to protect themselves for GC so I have to ride solo and use other teams.”

“In the last two kilometers, I nearly fell about three times”, race leader Gibbons informed. “So my head wasn’t in it. About 200 metres to go, I tried to come out and I just went backwards. Hopefully I can find my head again for the upcoming stages. My team rode all day because they had a lot of faith in me and I was confident in myself. Jacques Janse van Rensburg sat at the front of the peloton by himself for 90 kilometres. I’m sorry to have let the team down. It just wasn’t my day.”

Gibbons added that, being realistic, he expects stage 4 to be his final day in the yellow jersey as his team-mates Mekseb Debesay from Eritrea and Ben O’Connor from Australia will take the team’s leadership over from him. Colombians are set to fill the shoes of their compatriot Miguel Angel “Superman” Lopez who was the stage winner in the Cameron Highlands one year ago.