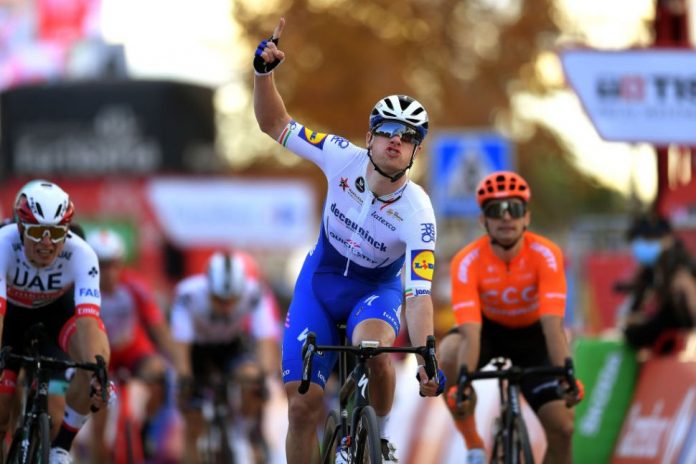 Sam Bennett (Deceuninck-Quick-Step) won the fourth stage of the Vuelta de Espana with an impressive burst of speed that confirms him as arguably the best sprinter in cycling at the moment.

Bennett, who won the sprinter’s green jersey in last month’s Tour de France, got an impressive lead-out from the rest of his team, but with 200 meters left in the stage, it looked as if Jasper Philipsen was going to steal the stage as he opened a lead of around three lengths.

However, Bennett’s speed saw him recover in the closing meters to claim the stage by a relatively comfortable margin.

The flat 191km stage between Garay and Ejea de los Caballeros in northern Spain was one of only four designed for a sprint in the 18-stage race, and the peloton completed the stage ahead of schedule with an average speed of over 60km/h in the last 10km of the day.

That allowed the experienced Quick-Step to control the peloton and set up Bennett for his third stage win in the Vuelta after claiming two stages in 2019.

Saturday sees another hilly stage which takes the riders from Huesca to Sabinanigo in the foothills of the Pyrenees in a 181km stage which has two second and one third category climb in the last 70 kilometers, and looks inviting for a small group of riders to attempt a breakaway. Enditem