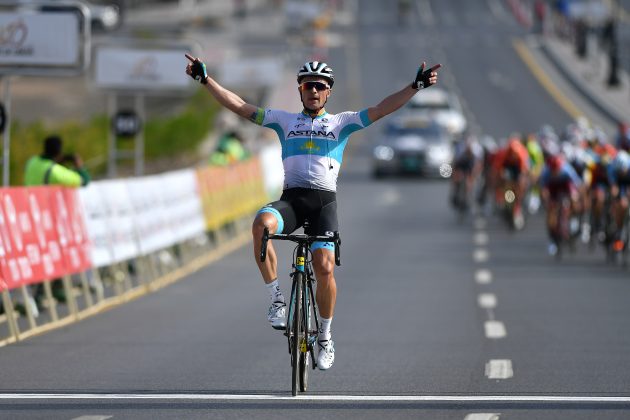 With an impressive attack at the final climb of the day, Alexey Lutsenko (Astana) claimed the second stage in Tour of Oman after a solo ride in the final 5 kilometers.

At the finish line, he managed to stay just in front of a select group that was chasing him. Alexander Kristoff (UAE Team Emirates) remains the race leader as he sprinted to a second place, three seconds behind Lutsenko, with Dimension Data’s Ryan Gibbons just behind in third.

“I was motivated for this stage as I knew it suits me quite well” said Alexey Lutsenko. “Last year I was third here, so I knew a stage win was possible. I attacked on the last climb and on the top, I already gained an advantage of 15 seconds. I continued pushing hard, also my sports director led me through the last kilometers, giving me great motivation. The final 2 kilometers were hard, but I’ve managed to keep my advantage until the end.”

Tomorrow’s 192.5-kilometer-long stage from Shati Al Qurum to Qurayyat will be another challenging day with climbing the steep Qurayyat two times in the final 40 kilometers of the stage.