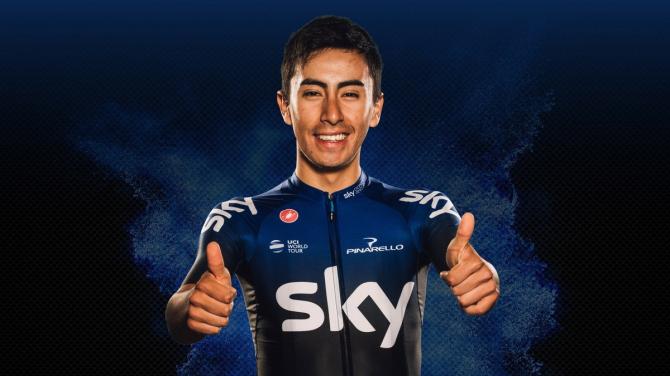 Ivan Sosa enjoyed a breakthrough year in 2018, most notably winning the Vuelta a Burgos, and will start life in Team Sky colours at Tour Colombia in February, alongside Chris Froome and compatriot Egan Bernal.

“I think it’s a team where I can learn a lot,” he explained. “There is a high level here – I believe that these are the best riders in the world. So what better than learning from riders as good as them? It’s cool for a young rider like me to learn from these guys, who are already big winners, so it’s a great thing.

“My aim in this first season with Team Sky is to do things well, to train well and if I want to ride a Grand Tour then that is a bigger motivation. I know I have the condition to ride in the key races, so for me that’s a big motivation, to train harder every day to achieve the dreams I’ve had for so long.”

There to help guide him were his two fellow Colombians, Egan Bernal and Sebastian Henao.

“Egan has helped me a lot. I have to thank him because it is hard to change teams and not know anyone, but thankfully I had him and Sebastian and they’ve said to just be calm and it’s all good. The team have been great, they’re all very nice people, so that’s cool and helps with settling into a new squad.”

Currently training hard in his homeland, Sosa is readying himself for Tour Colombia.

“Of course, the Tour Colombia is exciting because it means competing in Colombia and it’s been a long time since I raced there, so it’s something that’s really motivating, right? As a rider, to see your people supporting you every day, telling us, ‘Go on, yes, you can do it!’

“So it’s very cool and it’s something that also gives you a lot of motivation for the season.”