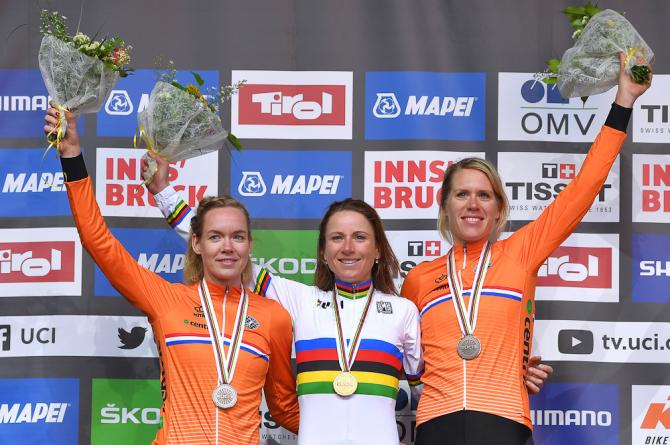 Van Vleuten, who rolled down the ramp last as the reigning champion, went out hard to lead by 19seconds at the intermediate time check before extending her margin to take the gold medal by 30seconds ahead of second-place Anna van der Breggen (NED).

The result, which will see the Mitchelton-Scott rider don the rainbow jersey again in 2019, adds to an already impressive season to-date, including three stages and overall victory at both the Giro Rosa and Boels Rental Ladies Tour and a win at La Course by Le Tour de France. The Dutch rider also currently leads the women’s UCI WorldTour with one final race to come.

“There’s not too many times someone has won twice the time trial world championships. It added a bit of pressure but I also felt the pressure last year so it was no different. If you’re here starting, you just want to win the jersey and I know how nice it is to ride and train in a beautiful jersey”, said Annemiek van Vleuten.

“The hard thing about this time trial was that it was uphill but in the descent you didn’t have recovery so you also needed to push. So, actually, your legs are screaming to stop pedalling in the descents but you have to keep on going otherwise you lose time. It made it almost a flat time trial with hills.

“I know I took some time in the first part but then I also felt I went out pretty fast. In the national championships, I went out too slow so I felt like I had to start fast and then die until the end, which is not nice to do. I was also a little in trouble in the second part, but that’s how you know you had a good time trial.