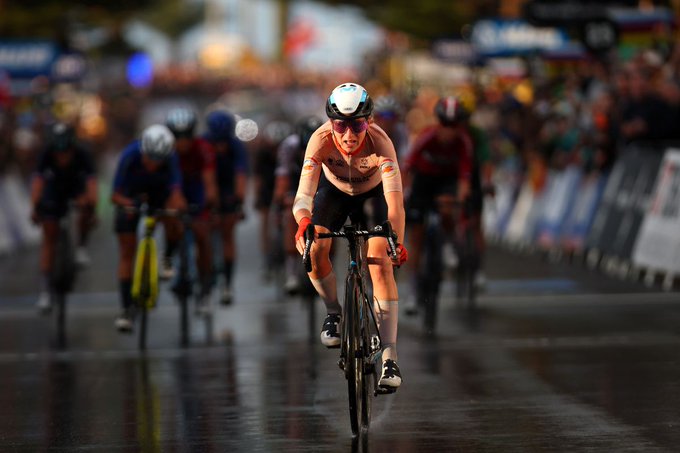 Annemiek van Vleuten surprised herself and the rest of cycling by recording the finest win of her career on Saturday at the World Championships.

Overcoming an elbow fracture sustained three days earlier, the Dutch great won her second world road race title with an attack in the last 600 meters that caught the other eight leaders napping.

The 39-year-old rider and her Dutch teammates were in disbelief at the finish. For Van Vleuten, who will retire at the end of next season, what she did on Saturday was extra special.

“Maybe this is my best victory. I am still speechless, I still can’t believe it,” she said. “It took me some time to realize I’d really pulled it off because I’m waiting for the moment that they tell me there was someone in front or it was a joke. I had the feeling it cannot be true.”

She crashed in Wednesday’s mixed team relay at the Worlds and sustained a fracture, describing the pain during Saturday’s race as “hell.”

The win also continues the domination of the Dutch women, who have finished on the road race podium at all but three of the last 20 Worlds.

In wet and cold conditions, Backstedt rode away from the peloton with a solo attack at 10 kms and stayed clear for the remaining 57 kms to win by more than two minutes. Eglantine Rayer of France was second ahead of Dutch rider Nienke Vinke.