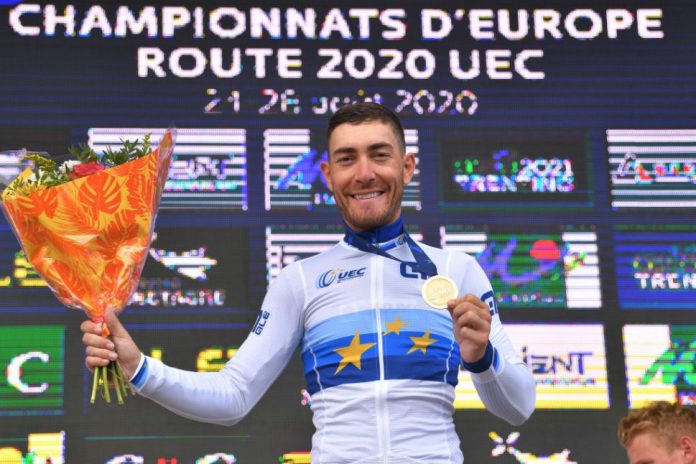 The 177.4 kilometres race in Plouay saw several attacks, with Mathieu van der Poel among the most active in the closing 30km. However, he was repeatedly tracked by Matteo Trentin, with the 2018 winner working to support his teammate Nizzolo.

A solo attack from Norway’s Markus Hoelgaard was also ended as the peloton built towards a sprint finish in Plouay.

Britain’s Tom Pidcock and Portugal’s former world champion Rui Costa made a last ditch effort to break clear of the peloton with two kilometres to race, but the Italian team closed successfully on the duo.

Davide Ballerini provided a lead out for Nizzolo, with the newly crowned Italian champion sprinting to the European title.

Nizzolo had held off the challenge of Arnuad Demare and Pascal Ackermann, who completed the podium on the same time as the winner. Van der Poel missed out on a medal in fourth.

“It’s been an incredible day. I had an amazing lead-out from the team but honestly all day they worked perfectly. It was really close and I thought I didn’t do a good jump but in the end I was lucky,” Nizzolo said.

“I lost this race by this much a few years ago but today I won and I’m so happy. We had a plan that if we were all together on the final lap that we should go for sprint. That’s what we did. I’m so proud of the team. We did an unbelievable job. Now I’m going to go to the Tour de France with this jersey.”