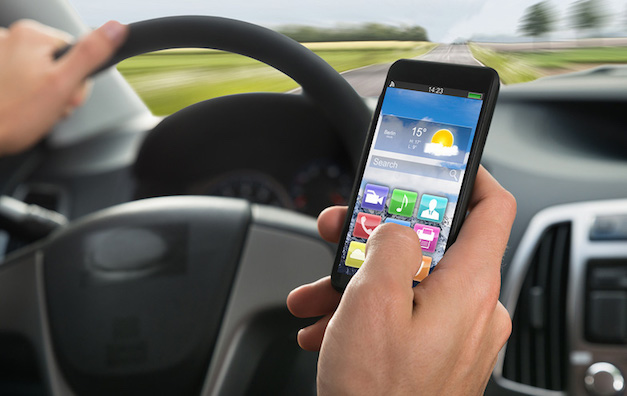 Distracted driving of all types is one of the major safety concerns of road cyclists.


Phone-glued-to-ear remains a serious enough distraction, but texting while driving can be far more dangerous because it requires a driver to completely take their focus off the road and their surroundings.

And it’s only getting worse in U.S.A., even as police resort to novel methods to try to catch texting motorists in the act – from driving in a semi to sit high up with a good view to dressing as a homeless person to patrol at intersections.

“It’s everyone, kids, older people — everyone. When I stop someone, they say, ‘You’re right. I know it’s dangerous, but I heard my phone go off and I had to look at it,'” said West Bridgewater (Massachusetts) Officer Matthew Monteiro. Officer Monteiro is a bike cop, pedaling around his town and citing motorists he sees texting.

The National Highway Traffic Safety Administration estimates nearly 3,500 people were killed in crashes involving distracted drivers in the mainland U.S. and Puerto Rico last year up from almost 3,200. The number of deaths in which cellphones were the distraction rose from 406 to 476.

“But many safety advocates say crashes involving cellphones are vastly underreported because police are forced to rely on what they are told by drivers, many of whom aren’t going to admit they were using their phones.”

“‘You don’t have a Breathalyzer or a blood test to see if they are using their phones,'” said Deborah Hersman, president and chief executive of the National Safety Council and former chairwoman of the National Transportation Safety Board. “‘Certainly, law enforcement can ask people, ‘Can I see your phone?’ but people can refuse, so they then have to get a search warrant.'”

The death rates and mayhem directly and indirectly linked to distracted driving continue to climb even though 14 states ban drivers from using hand-held devices for anthing while driving, including phone calls. And 46 states have laws banning texting and driving (typically also including using apps or email, surfing the Internet, etc.).