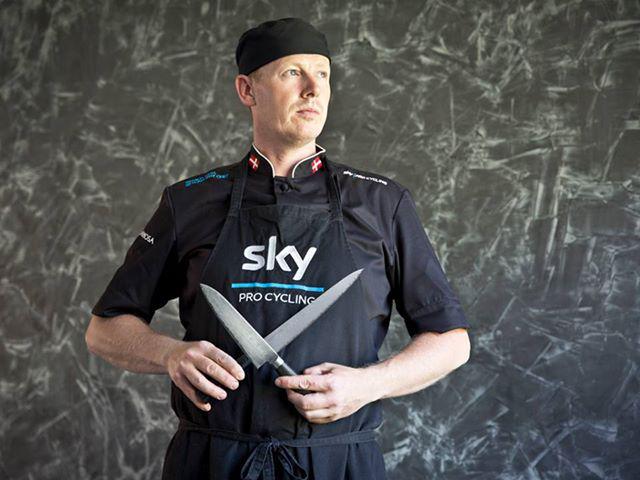 In a stage race like the Tour de France, riders aren’t just trying to ride well for one stage—they’re trying to repeat good performances over and over, and recover overnight. While things like massage and proper bike maintenance certainly play a role, food and hydration are even more important. Riders need to fuel both on the bike and off. And their food choices aren’t limited to carbs anymore: In the past few years, the field of nutrition has evolved to focus on a more-balanced approach with plenty of vitamins and minerals, just in higher quantities.

All the nutrition experts we talked with said that Tour athletes are typically eating anywhere from 7,000 to 8,000 calories per day—about three times what a recreational cyclist needs. While eating exactly like a Tour rider isn’t a great idea for us mere mortals, a few of their nutritionists have some tips and tricks to make you feel like you belong in the pro peloton.

Quality matters “You have to think about bike riders being Formula 1 cars,” explains Nicki Strobel, Orica-Scott’s nutritionist. “The better the fuel that goes in, the better result you get out. Everything that they do is about getting the best energy possible.” This may sound surprising, since most people picture cyclists binging on white bread and pasta, but Strobel explains that the basic tenets of pro cycling nutrition have shifted in recent years. The main change, he notes, was when the “no needles” rule came into effect and riders could no longer get vitamin injections during races. “So instead of eating white pasta, riders have to eat their vitamins, through pills or proper good food,” he says. And that’s where the nutritionists come in. “The wrong food does no good for you,” explains Judith Haudum, nutritionist for BMC. “Mindfulness is getting a lot bigger in cycling, thinking about what you’re eating.”

Timing is everything After your ride, replenishing your glycogen stores with a recovery drink or snack goes a long way towards helping you get ready for your next adventure. It also keeps you healthy. “You want to minimize the stress on the immune system by eating the right food in the right amount at the right time. Like, after a stage, in the first hour, it’s really important for the immune system that you eat something,” explains Haudum. “If you don’t, you get really weak.”

Eat a good breakfast If you have a long ride coming up during the day, start fueling with a proper breakfast. For Tour riders, that means largely carbs—of the fast- and slow-burning varieties—plus a bit of protein. “They eat porridge with banana, or they put in dried fruit,” says Haudum. “Then they have a plate of pasta or rice. Then, something protein-rich, like an omelette or two eggs. They’ll also drink espresso—some do decaf and some do normal.”

Team Orica-Green Edge has a similar meal plan. “It’s pretty standard compared to what most people would eat,” Strobel says. “We have different types of porridge and fresh-baked bread every morning, plus eggs, a good smoothie, fresh juice, and some riders have rice or pasta for the extra carbs. It’s what you’d eat at home, but a lot more of it.”

Fuel your long ride right “On the bike, riders are eating around 90 grams of carbohydrates per hour, about 360 calories,” says Haudum. “That’s the maximum the body can absorb: More than that, it sits there and doesn’t do any good.” Because we can only absorb so much, timing is everything when it comes to fueling: If you wait too long to start, you won’t be able to catch up. Because of that, Haudum suggests having a plan in place before you head out to ride—and sticking to it. “If you’re doing a century ride, you should know how much you’re eating each hour to finish and feel good,” she says.

You do you Both Haudum and Strobel say that they let the athletes choose how they take in calories, whether that means sports drinks, gels, or bars. “Some only like to drink calories, some like it as a mix of drinking and eating,” explains Strobel. “It’s very individual. Some feel like gels put a lot of stress in the gut, others don’t like so much sugary water.” Experiment and find what works best for you.

Drink even when it’s hard How much water you need is an individual issue, each nutritionist says. It depends on the weather, how long your ride is, your sweat rate, and many other factors. But when the riding gets hectic, Haudum notes that the biggest problem she sees is that when the going gets tough, riders stop drinking. “Sometimes the race is so hectic and it gets really hard to drink because you’re so focused on the race. There can be hours where they don’t have a single bottle,” she says, and advises riders to keep on top of their hydration.

Make dinner count The evening meal is the one chance most of the riders have to relax, chat with friends, and take in some protein before turning in for the night. “A lot of the riders like to have a big chunk of protein at night, like meat or eggs or fish,” says Strobel. “Most riders still have carbs, though some are trying to eat a bit more fat to replenish the energy lost during the day. It’s a balanced diet compared to what it used to be. They’re now eating a normal meal, just with a big dose of everything.”

Fuel your rest day If you’re coming off a hard training block, or you’re taking a day off, it might be tempting to cut way back on calories. But Haudum explains that it’s important to fuel on a rest day as well. “I see in a lot of cases, riders don’t eat enough,” she says. “They don’t need to eat like they just did a five-hour ride, but some riders reduce carbs too much and aren’t ready for the next day’s stage. They still need to fill up the glycogen stores and fuel for tomorrow.” While you should be careful to avoid overindulgence, don’t cut out carbs altogether, especially if you’re riding the next morning.

Really serious? Cut out the booze If you’re coming up on your big race of the season, it might be time to cut out the booze. That’s what the BMC pros do, anyway. “No alcohol during the Tour, or even during the weeks before,” says Haudum. “Maybe if you win a stage or have the yellow jersey, you can have a glass at dinner.” No yellow jersey? No wine. (Sorry.)