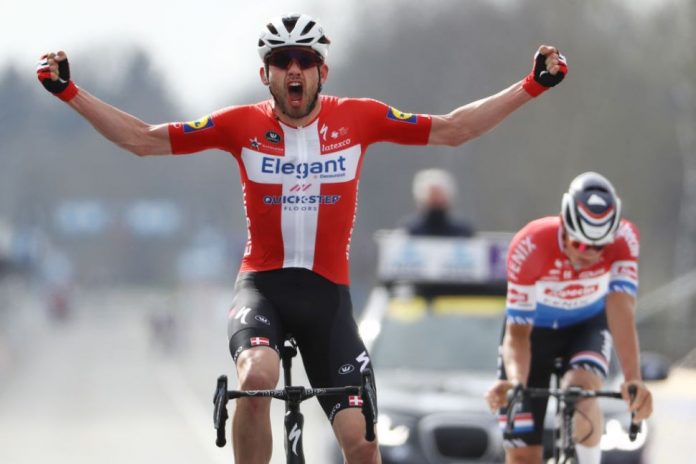 Kasper Asgreen claimed the biggest victory of his career after he beat Mathieu van der Poel to win the Tour of Flanders on Sunday.

“I felt good in the last two kilometres and I decided to trust my sprint. I left Mathieu in front and stayed in the wheel and decided when I wanted to go,” said Asgreen. “It was a really, really hard race, we were both on the limit.”

Van der Poel hit a virtual wall in the final metres as he was leading the sprint, almost coming to a halt and shaking his head as Asgreen sped past.

Asgreen, one of six riders to break away from the main group with 37km left, attacked 26km from the line and was only followed by Van der Poel and Wout van Aert.

Van der Poel then produced one of his trademark brutal attacks in the penultimate hill, dropping Van Aert and Asgreen, only for the Dane to come back on a flat section.

A faster sprinter, Van der Poel however was on an empty tank while Asgreen still had a bit of strength to add to his victory in the E3 Saxo Bank Classic. Greg van Avermaet took third place.