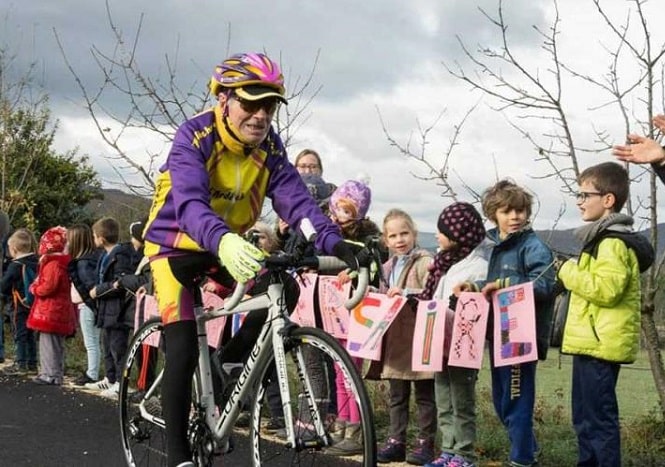 On November 26, as always, Robert Marchand celebrated his birthday on a bicycle, but this time, for his 109th birthday.

Like all French people, Robert Marchand had to respect the confinement which prohibited him from going out for sports more than a kilometre from his home. Deprived of his usual ride, he sent a letter to the President of the French Republic, Emmanuel Macron, to express his frustration.

“I know the gravity of the pandemic and I understand the need for this second confinement, but I find it regrettable that it deprives us in large part of physical activities” he wrote to the president. “Sport, I believe I am a living proof of this, is a cure for disease and a factor of good health. Those who play sport clutter up hospital emergencies much less than those who do not.”

Robert Marchand has always played sport, but he waited until he was a hundred years old to become a celebrity. On September 17, 2012, on the track at the UCI velodrome in Aigles, he set the world record for over one hundred years, covering 24.1 kilometres an hour. Two years later, at St Quentin en Yvelines, he raised this record to 26.927 kilometres. In between, in Lyon, he had covered a hundred kilometres in 4:17:27, To the amazement of doctors and researchers who took him as the subject of their study on ageing. That day, the French physiologist Véronique Billat calculated that Robert Marchand had the cardiac capacities not of a centenary but of a fiftieth! That was the proof that activity, both physical and mental, regenerates cells. From California, Arnold Schwarzenegger, who converted to cycling for health reasons, wrote this tweet: “This is absolutely, unquestionably inspiring. I am ready for a bike.”

Robert Marchand immediately answered Arnold Schwarzenegger that he was waiting for him in France for a commune ride. The invitation still stands, but it has become problematic. The pandemic, its two waves and its two confinements have deeply affected the morale and physique of Robert Marchand.

Because of the health crisis, the champion left his studio in the Parisian suburbs where he lived alone in complete autonomy. He is now living in an accommodation establishment for the elderly or dependent (EHPAD) where Gérard Mistler, the president of Ardéchoise found him emaciated. “Because of the Covid, Robert could no longer go to buy his food and he could not stand the industrial meals that were delivered to him,” declared the president of Ardéchoise. “Robert does not suffer from particular pathologies, but he has lost morale.”

To reassure him, a French bicycle brand, a partner of the Ardéchoise, gave Robert Marchand, as a birthday present, a home trainer specially tailored for a 109-year-old champion. The champion has refound a smile and enough energy to address the President of the French Republic a plea in favour of sport.

The Ardéchoise is the largest cycling event in the world. Every years, during the third week of June, nearly twenty-thousand cyclists from all over the world gather in St Félicien, an Ardèche village of 900 inhabitants. Robert Marchand wears the bib number of this event. But in 2020, the event did not take place due to the pandemic.