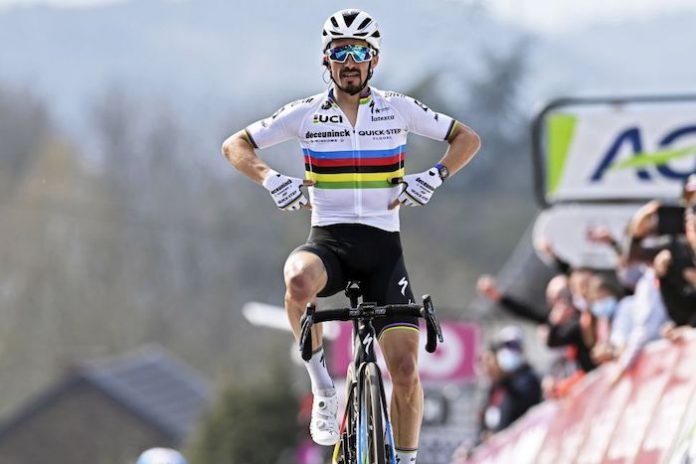 Julian Alaphilippe has been named in the French team to attempt to win a third successive road race world title weeks after dislocating his shoulder.

The 30-year-old’s participation had been in doubt when he exited the Vuelta after suffering the injury in a fall during the 11th stage on August 31.

Although as reigning champion a place is reserved for Alaphilippe he has proved he is fit enough to merit a ticket on the plane to Australia by resuming training soon after the tumble. He will hope a dreadful season ends on a high.

A spectacular fall in the Strade Bianchi at the beginning of March was followed by him missing the Milan-San Remo due to bronchitis and he also sat out the Tour of Flanders.

However, barely back on his bike he suffered multiple injuries when he collided with a tree in a crash during the Liege-Bastogne-Liege classic.

He was out of action for a lengthy spell as a result of that, firstly in hospital and then undergoing rehab.

Although back in the saddle he was omitted from the Quick-Step team for the Tour de France and was then hit by a bout of Covid-19.

“He has seen more hospitals than he has races,” commented team manager Patrick Lefevere.

Apparently Lefevere would have preferred Alaphilippe to have missed the World Championships and raced in the final classic of the season, Il Lombardia, on October 8.

Alaphilippe will have two Quick-Step team-mates, Florian Senechal and Remi Cavagna, alongside him in Wollongong, for the race on September 25.

Also in the French team is Christophe Laporte, the only home rider to win a stage on this year’s Tour de France. Pavel Sivakov is selected for the first time in French colours.