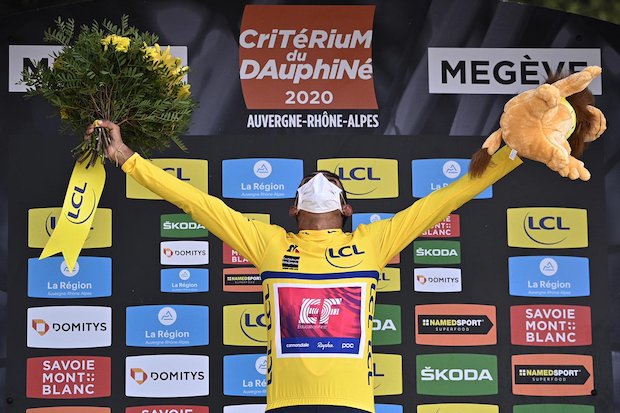 Roglic’s withdrawal, after a crash on Saturday, looked to have given Thibaut Pinot control of the race, but Martinez had other ideas.

The Colombian was part of an attack that left Pinot trailing with 15km remaining of the 153km mountainous route starting and finishing in Megeve and crossed the line second behind stage winner Sepp Kuss.

Pinot battled desperately to claw back time on the day’s final climb back into Megeve but could not regain the overall lead as Martinez won by 29 seconds.

It is the fourth time a Colombian rider has won the Criterium du Dauphine, seen as a crucial indicator of form ahead of the Tour de France. Luis Herrera won in 1988 and 1991, while Martin Ramirez claimed the title in 1984.

“This morning they told me Roglic wouldn’t start, so I knew the race would be hectic from the beginning,” Martinez said. “I was at the limit but I was determined to make it to the finish. It’s one of the biggest race in the world and to be able to win this, coming from Colombia, makes me very happy.”

Roglic suffered bruises and cuts after crashing on Saturday. His Jumbo-Visma team said on Twitter: “The evolution of his injuries will determine the plans for the upcoming races. Speedy recovery.”