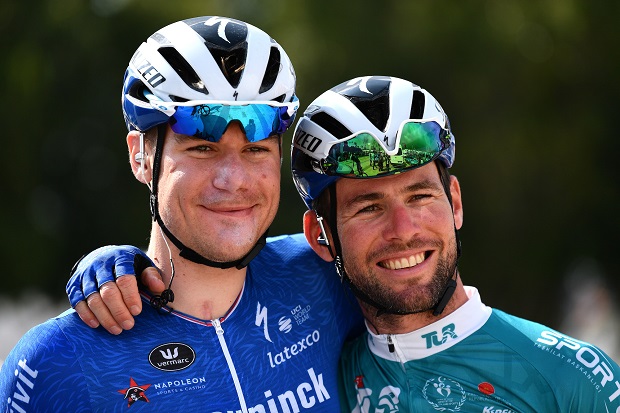 As the elite cycling teams announced their final line-ups for the 2022 Tour de France, cycling fans were quick to spot one glaring omission as Quick-Step Alpha Vinyl Team rider Mark Cavendish was left out of the final roster, which we reported on here on Cycling Today. This sparked a heated debate on social media as to why the Isle of Man sprinter was not included.

No chance to defend green jersey

Cavendish was the points classification winner at last year’s Tour de France but will not get the chance to defend the green jersey. The news came just days after the 37-year-old had regained the British National Road Championship title, which he also won in 2013.

The race runs from July 1 until July 24 with Slovenian Tadej Pogacar starting as -138 favorite with Betway to make it three Tour de France wins in a row. Out to stop him will be last year’s runner-up Jonas Vingegaard and three-time Vuelta a Espana winner Primoz Roglic who are both priced at +400. It would be a major shock if the winner came from outside those three. Based on Eddy Merckx’s comments, it looks like Pogacar’s dominance is here to stay as he expects him to follow in his footsteps, as we covered here on Cycling Today

On the verge of history

Cavendish was one of the bright sparks of the 2021 tour as he won stages four, six, 10 and 13, bringing his total of stage victories to 34, equalling record-holder Eddy Merckx. The thought of him being left out has angered many fans and pundits. However, there were some observers who defended the team’s decision.

Jakobsen fastest in the world

The defense is that Fabio Jakobsen is the right man to be lead sprinter for the team as his results this season have been more impressive than those of Cavendish. He finished first in the Kuurne–Brussels–Kuurne, first in the Elfstedenronde, and was points classification winner in the Tour of the Algarve, the Tour of Hungary and the Tour of Valencia, as we covered on Cycling Today. He was also a stage winner at Paris-Nice and in the Tour of Belgium. Jakobsen is clearly the best sprinter in the world right now and including Cavendish would have complicated the team dynamic.

Stories to be told

Fans of Cavendish have pointed out that beating Merckx’s record would have been a great story for the team and sponsors. But Jakobsen could also write his own fairy-tale ending after battling back from a life-threatening crash in the Tour of Poland two years ago. The crash put Jakobsen in an induced coma, as reported by The Guardian at the time, but he fought back and made his return at the Tour of Turkey in April 2021. The team clearly have one eye on the future and feel that including Cavendish would have been an indulgence they cannot afford.

What’s more, the team is based in Belgium with many Belgian sponsors, so the idea of beating Eddy Merckx may not be as appealing to those on the inside as it may be to fans of Cavendish. Merckx is still regarded as a national hero in the country and preserving his legacy might have played a major part in the team’s decision-making.

Despite all the reasoning, there is no doubt that the Tour will be a little less colorful without the Manx Missile in the starting lineup. To make matters worse, Cavendish’s response on Instagram suggested he had found out the news via social media rather than directly from the team.

The news that World champion Julian Alaphilippe will also miss out was another blow for fans. The Frenchman won stages in each of the last four Tours (six in total) but has only just returned after recovering from a serious crash at Liege–Bastogne–Liege back in April, as per CNN.

Alaphilippe is one of the most popular riders on the circuit and a fan favorite at the Tour having spent significant time in the yellow jersey over the last three editions. He will now concentrate on getting 100% fit, with an appearance at the Vuelta a Espana possibility. He was a stage winner in Spain’s Grand Tour in 2017 but has not contested there since. However, even without Cavendish and Alaphilippe, this is still set to be an exciting event as Pogacar looks for a third consecutive title.