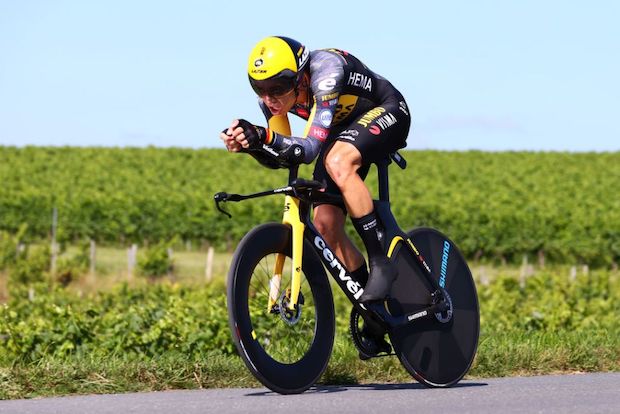 Tadej Pogacar was poised to win a second consecutive Tour de France title as the Slovenian retained his overall lead following the final time trial, a 30.8-km solo effort from Libourne on Saturday.

The 22-year-old rider finished eighth in the 20th stage won by Wout van Aert (Jumbo-Visma), who clocked a best time of 35 minutes 53 seconds.

Kasper Asgreen and Jonas Vingegaard were second and third respectively in the 20th stage, 21 and 32 seconds off the pace.

Overall, Pogacar leads Vingegaard by 5 minutes 20 seconds and Richard Carapaz by 7:03 ahead of Sunday’s final stage, a largely processional ride from Chatou to the Champs Elysees in Paris.

“I’m really happy that it’s over. It’s been a really heavy, demanding three weeks. We rode hard from morning to night, every day. Yesterday (Friday) I wasn’t very motivated, you end up losing motivation after three weeks,” Pogacar, who took no risks through the Bordeaux vineyards during the time trial, told reporters.

“I said to myself today (Saturday): “Come on, let’s go for it! But well, it wasn’t my fastest day on a bike and then the strongest rider won. I am still very happy with my result and the way my day went.”

Vingegaard said: “I waited for Primoz (Roglic) when he crashed (in stage three) but I only lost one minute 20, and I would still have been second. Pogacar was so strong we couldn’t do anything. He won the Tour in the rain stages. I would have been one minute closer but it would not have made a difference.”