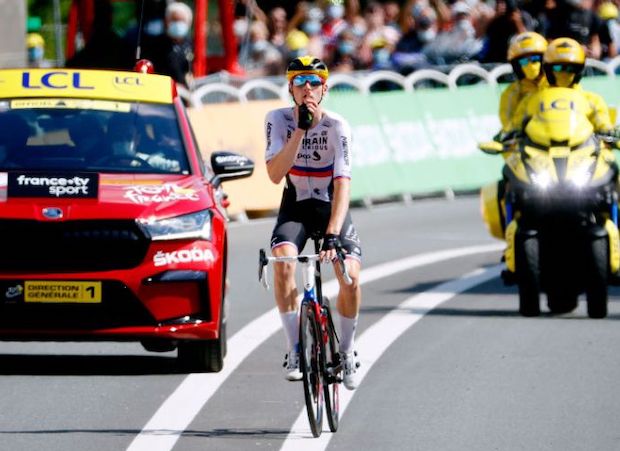 Matej Mohoric gave Bahrain Victorious something to cheer with his second stage win in this year’s Tour de France two days after French police searched his team’s accommodation and vehicles amid an investigation into potential doping.

Mohoric, who had already prevailed in the 7th stage in Le Creusot, attacked from the breakaway to wrap up a solo victory on the 19th stage, a 207-km ride from Mourenx, virtually zipping his mouth shut as he crossed the line.

“It was just a sign to show people who question our performances to be mindful that we are making huge sacrifices… to come here,” Mohoric said. “That brought us even closer together, we are more determined to show that we have nothing to hide and collaborate with the police.”

Mohoric added that after feeling “weird” about the searches that were conducted until 2am local time, he was happy to comply with the investigation, as his team said on Thursday.

“I can’t answer for my team mates, I can only speak for myself. At first I felt weird about being questioned but then I thought I should look at the bigger picture,” he explained.

“This is actually good for the sport of cycling. To be transparent to have these questions because there were big problems in the sport in the past.

“I can only speak for myself but I never saw these things happen, something illegal, so I can be super clear about myself. If somebody needs to go through my stuff through my phone I will accept this.”

The French prosecutor’s office in Marseille on Thursday said it had opened a preliminary investigation into the Bahrain Victorious team after police searched the outfit’s hotel.

It said the investigation was into “acquisition, transport, possession, import of a prohibited substance or prohibited method for use by an athlete without medical justification.”

Mohoric’s compatriot Tadej Pogacar retained the overall leader’s yellow jersey for UAE Team Emirates after staying safe in the peloton, crossing the line more than 20 minutes 50 seconds off the pace.