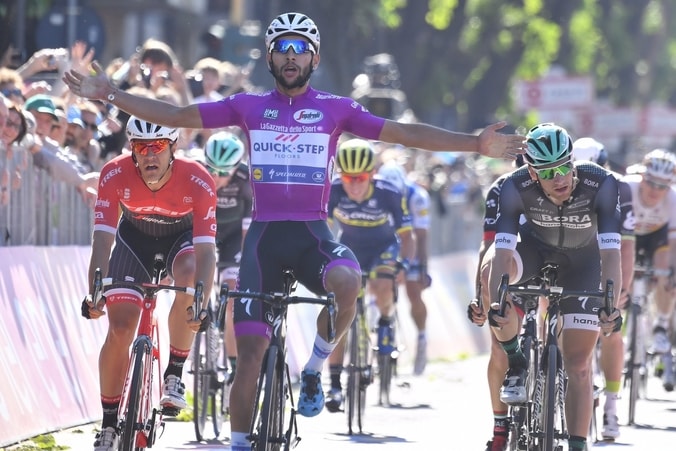 Fernando Gaviria claimed his fourth win at the 100th Giro d’Italia on Friday after sprinting to victory at the end of stage 13.

The Quick-Step Floors sprinter produced again an impressive late burst to finish ahead of Sam Bennett (Bora-hansgrohe) at the end of a flat 167km ride from Reggio Emilia to Tortona.

A tricky left-hand bend with 450 meters remaining turned the bunch sprint into a messy affair, but despite not being in the best position, Gaviria unleashed an incredible acceleration on the final straight and hit a peak power of 1478W, which resulted into a 72.8 km/h top speed that catapulted the South American to another outstanding and exciting victory, ahead of Sam Bennett (Bora-Hansgrohe) and Jasper Stuyven (Trek-Segafredo).

Not only he is now the Colombian rider with the most stage wins at the Giro d’Italia, but Gaviria also became the first rider since Bernard Hinault at the 1978 Tour de France to notch four stage successes on his Grand Tour debut. Despite these fantastic achievements, Gaviria insisted on keeping his feet on the ground.

“Having this record doesn’t mean much for me. What is important is that it underlines the fact that I came well-prepared to the Giro d’Italia. At the same time, I am happy to take so many victories and have the maglia ciclamino going into the penultimate week-end of the race, especially as many Colombians, from fans to important athletes, came here to watch me. That really means a lot”, said Fernando Gaviria.