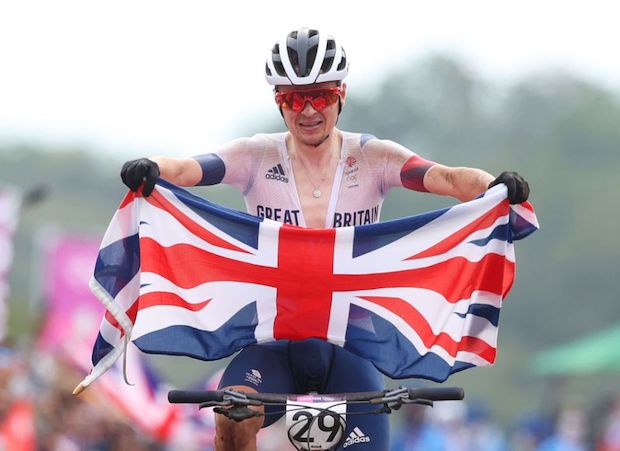 Tom Pidcock became the youngest ever Olympic mountain bike champion as he left his rivals in a cloud of dust as he stormed to the gold medal on the Izu course on Monday.

The relentless 21-year-old seized control after four laps of the 4.1km Izu circuit and he was never challenged, riding away to victory by 20 seconds ahead of Swiss Mathias Flueckiger.

So far ahead was the Yorkshireman that he even had time to grab a British union flag as he crossed the finish line in front of an enthusiastic crowd who were permitted in.

“I’m always better when I take control myself. I take my own lines, my own speed. Once we started I was fine, all the nerves kind of went and I concentrated on the race,” he said.

“It’s nothing like any other race. The Olympics just transcends any sport. You compete and represent your country and everyone in your country is behind you, no matter in what sports they like. It’s just national pride, it’s unbelievable.”

Pidcock, a road racer with Ineos Grenadiers and tipped as a future Grand Tour champion, arrived at the Games having fractured his collarbone in a crash while training last month.

The win completes a remarkable turnaround for the Leeds-born rider who prepared for the climate in a super-heated tent in the spare room of his house at home in England.

“I’ve trained really hard, I knew I was in great shape but there’s always doubt when I haven’t performed in a race.”

Pre-race favourite Mathieu Van der Poel, who spent several days in the yellow jersey at the recent Tour de France, had his hopes dashed by a first-lap crash as for the second successive day the Dutch cycling team suffered disappointment.

He flew over the handlebars of his bike after a steep landing on one of the bouldered-sections littering the technical and undulating course. Battered and bruised, he resumed and made up some ground but quit on lap five, appearing distraught.

Van der Poel had wrongly-believed there was a ramp beyond the boulder and was later taken to hospital for scans on a hip injury, he said on Twitter.

“He went in super slow and I backed off because I knew that wasn’t going to end well,” Pidcock, who was right behind the incident, told reporters later.

Fluckiger, one of the in-form riders this season with two World Cup wins, stayed in contact with Pidcock for the opening four laps but a misjudgement on a rocky uphill section meant he had to get off his bike, losing him momentum.

“I did some mistakes in the middle of the race, two times in one lap,” he said. “I lost the front wheel and then I had to go off the bike and then lost traction in the steep climb and had to walk again, lost another six or seven seconds.”

Spain’s David Valero Serrano edged out defending champion Nino Schurter for the bronze medal. The Swiss veteran failed to win a medal in the event for the first time in four Olympics.