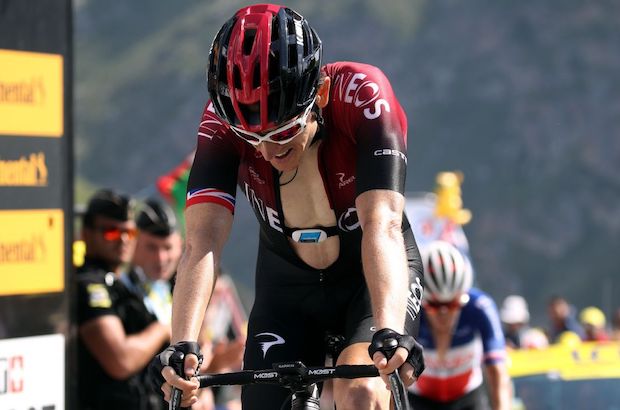 (AFP) – Defending Tour de France champion Geraint Thomas put a brave face on his mountain-top wobble Saturday after slipping over two minutes behind overall leader Julian Alaphilippe, but refused to give up on his title bid.

The Welshman’s Tour defence preparations were hit by a nasty fall in June’s Tour de Suisse, but with a powerful team around him he came into the race as hot favourite.

Alaphilippe, however, has rocked the race with a series of swashbuckling attacks that have put him and not Thomas in the overall lead.

“There are a lot of strong guys. Everyone within four minutes is still dangerous,” insisted Thomas.

Worries about a serious threat from the upstart only really emerged after Thomas came second to Alaphilippe in Friday’s time-trial.

“I was overheating a bit,” said Thomas, who looked uncomfortable in the baking heat at Pau in the south-west of France.

“It was that last bit that got me, in the last 8km I didn’t have the power I wanted,” he admitted.

Thomas had openly predicted Alaphilippe would crumble as the Tour took to the peaks, but on the first of a string of summits finishes, the opposite happened Saturday.

“I just didn’t feel quite on it from the start really to be honest – just quite weak,” Thomas told his team website.

“At the end I just knew I had to try to pace it,” he said after finishing 29 sec adrift of Alaphilippe, who came second six seconds behind his compatriot Thibaut Pinot.

“I didn’t really attempt to follow when they kicked,” he said of allowing a clique of five riders to get away from him at the end of a 17km climb.

“I thought it was better just to try to ride my own pace and limit my losses that way, rather than stay with them and blow up on the steepest bit at the end.”

His analysis could prove well-founded with an even harder Pyrenean mountain stage coming up on Sunday ahead of the rest day.

“It was a tough day out there. There’s still a lot more to come and hopefully I’ll feel better tomorrow,” said the affable 2018 winner who proved a very popular champion even in France.

Thomas feels the whole overall standings will be shaken up more than once with three tough Alpine stages still to be raced next week.

“If you worry about one rider too much, you forget about the rest and you end up losing,” Thomas told French television.