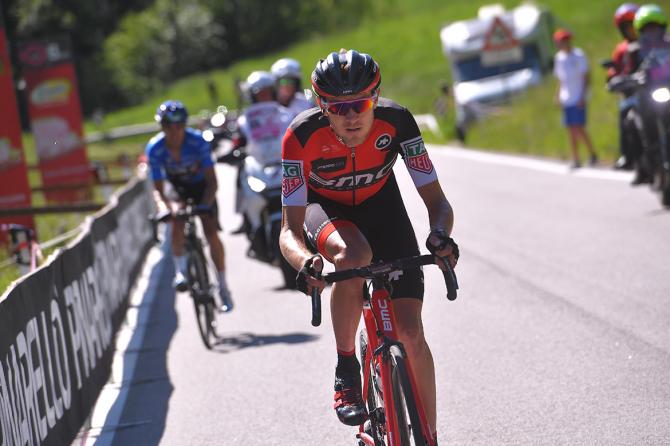 Tejay van Garderen claimed his maiden Grand Tour stage win in a strong display of strength and determination to win stage 18 of the Giro in a head to head battle with Mikel Landa (Team Sky).

“Mikel Landa is a very good bike rider. He is a very quick sprinter and I think it got a little bit tactical at the end and I tried to just be patient and not get overly excited. Coming into the last corner, I knew it was downhill and you had to hit it in the first position. I was coming in on the inside and he was going to close on me a little bit so I just thought, ‘I’m not braking’. If we crashed, we crashed but I wasn’t going to brake.”

“It was a hard day. Lots of climbing. I knew all of the climbs. I have done training camps in this area quite often. It was just an amazing feeling. Landa and I got away on a descent right before the finish. We looked around and saw that it was just us and we decided to keep going.”

“It is incredible. It feels great. I came here obviously with GC ambitions but that didn’t materialize. I’ve just tried to keep the morale high. I love this area. I knew every inch of the road today and it was almost like training at home.”

“I’m eight years as a professional now and this is my first Grand Tour stage victory. It was emotional just because I’ve had so many trials these past few years. Sometimes things go up and sometimes they go down and today was definitely up and hopefully I keep that trajectory. It feels good. It is good to know that I am still capable of doing a ride like that and now I just have to put it all together into three weeks like I have done in the past and like I know I can do again.”

“I still think I’m capable of doing GC in a Grand Tour in the future, I’m not going to give up trying for that,” van Garderen said. “Things might change as far as getting the full support of a team. I know that I’m not going to be up there with [Nairo] Quintana on Blockhaus, but I see myself as a similar rider to someone like [Tom] Dumoulin. I just need to eliminate these bad days and learn myself a bit more. But no, I’m not giving up on general classification.”