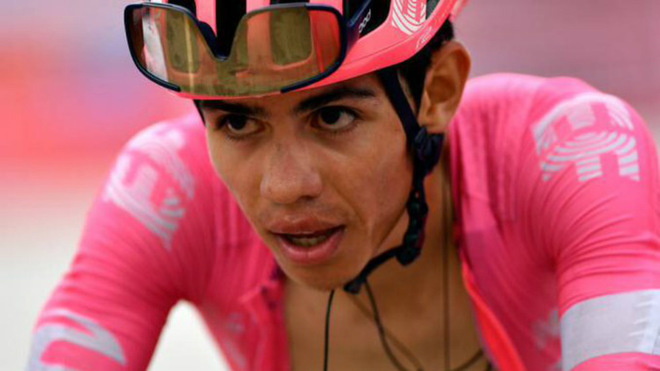 Sergio Higuita (EF Pro Cycling) is complying with Colombia’s mandatory quarantine measure, and is doing so in Santa Elena outside Medellín. From there he conducts his training, and like everyone else, he looks for ways to entertain himself during the pandemic.

“I get up at nine o’clock, have breakfast, get ready, and do my roller training. There are days when I do two or an hour and a half, some afternoons I do strength training. Then I watch Netflix or read, at night I have dinner and go to bed”, Higuita told ESPN Bike.

This is practically the same routine of all the riders in the international peloton who do not have the possibility of going out to train due to restrictions in their respective countries.

Higuita said that he trains under the direction of Igor Gonzalez de Galdeano, who is currently his coach, a man with extensive experience as a rider and especially as a time trialist.

“I like him a lot because he was a timekeeper, and that’s what should matter to us most right now. The time trial is where one loses more difference and he gives me many advices, I have a great advantage with his experience in the time trial”, he said.

“I was really looking forward to making a return to the Basque Country. Last year I rode with the Euskadi Foundation, and the Basques are quite good to me, because I did very well when I was there, and many people know me”.

“Going to the Ardennes classics was a very big dream I had, because it is a cycling festival, they are very hard, but I think I can do them very well, and the team wanted me as a leader. It’s a bittersweet feeling, but I’m still 22 years old. Next year we’re going to try to do better, and at the end of this year if we go back to racing, we’ll do very well,” he said.

In addition, he did not hesitate to give his opinion about his compatriots Bernal, Quintana, and Urán, whom he sees as an example to follow.

“Rigo is a man with a lot of experience, who drives the team to be better. Now with a closer perspective, I realize that he is much bigger than I thought, sportively I knew he was a very good cyclist, he was an idol for me. But also, he teaches you, advises you, and gives you a hand when you need it, and as a young man I learn a lot from him,” he said about his team leader.

“Egan took a very big step for us Colombians in European cycling, more than Rigo or Nairo had done, he showed that nothing is impossible being so young. He is a humble guy, who gives you advice, who is calm, but at the same time reflects security. He is a great one, especially his mentality. He’s a great friend in the peloton and in normal life,” he said of the Tour de France champion.

And finally he made clear what he thinks of Nairo Quintana: “Nairo is the best cyclist that Colombia has given, he has been an example because he has had very bad moments, and he has risen again from the ashes like a phoenix, returning to victory. He represents the struggle and the bawdiness of the Colombians. When he won the Giro I was 16 years old and put us to dream many, and now I’m competing with him and giving him wood,” he concluded.