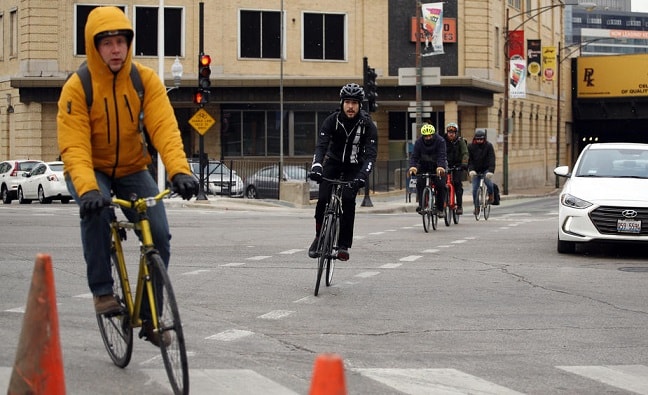 Should bicyclists abide by the same traffic laws as motor vehicles at intersections? A new study from DePaul University suggests they shouldn’t always have to.

The study recommends cities to revise their traffic laws to allow cyclists to use the ‘Idaho Stop,’ named for the 1982 law in that state. The practice permits cyclists at low volume intersections to treat stop signs as yields and red traffic signals as stop signs.

“It legalizes something that people see as common sense,” said Ken McLeod, state and policy manager for the League of American Bicyclists, a nonprofit advocacy group. “Legalizing the stop reflects that bicyclists already have a sense of self-preservation and will be safe when they approach intersections.”

The study acknowledges that the majority of cyclists already operate this way. “Only about one cyclist in 25 presently complies with the law to come to a complete stop,” the study wrote. A conclusion of this is that cyclists do this out of safety, citing a 2007 study in London that concluded “women were more vulnerable to truck collisions due to their tendency to be less likely to disobey red traffic signals than men. By going through a red traffic signal before it turns green, men are less likely to be caught in a truck driver’s blind spot.”

This conclusion was reinforced in Chicago this year as three of the six cyclist deaths were women killed by trucks turning at intersections, including the country’s first bike share death.

A cautionary sentiment was offered by Chicago’s ‘Bicycling Ambassadors’ program manager Charlie Short who suggested that one cyclist’s  safe Idaho Stop may be another’s dangerous behaviour.

To address the problem of unsafe cycling, the study proposed lowering fines for cyclists who commit minor traffic violations and instead offering “diversion programs” such as traffic safety classes as an alternative.

Traffic fines for cyclists range from $50 to $200, though relatively few tickets are issued. Chicago Police Department records obtained through the Freedom of Information Act show that 3,301 citations were issued in 2015, mostly for riding on sidewalks, or about nine tickets per day. That’s down from a high of 4,706 in 2014 and up from 2,293 in 2013.

Michael Keating, a lawyer who specializes in bike accidents, said that the region also has a problem with cars not stopping at stop signs, which creates a greater danger to the public than bikes not stopping. He said police need to take a close look at enforcement for all vehicles.

Keating said bicyclists also have to remember that they have responsibilities as well as rights, and the recklessness of some creates problems for everyone. He thinks cycling rules and safety should be taught in driver’s ed classes.

“You have to give respect to get respect,” Keating said. “I’m sometimes concerned that cyclists that act as scofflaws aren’t giving the respect, so the ones who do adhere to the rules of the road don’t get that respect in return.”

Watch: Cyclist wiped out by waves on bike path