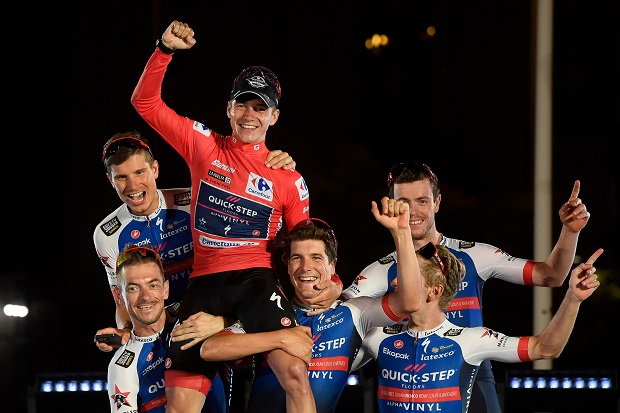 Remco Evenepoel put some tough times behind him with the biggest win of his career on Sunday, clinching 2022 Vuelta a Espana title.

“It’s history for team, for my country, for myself,” Evenepoel said. “I think we can be really proud of what we did the last three weeks.”

It was a statement win for Evenepoel, who became the first Belgian to win a grand tour since Johan De Muynck won the Giro d’Italia in 1978. It was also sweet redemption for his father, Patrick Evenepoel, who finished 113th of 114 riders in the Vuelta in 1993.

Evenepoel crossed the finish line one last time while wearing the leader’s red jersey in Sunday’s celebratory final stage through the streets of the Spanish capital, then got a hug and a kiss from his partner before raising his bicycle overhead in front of his teammates.

“Now it really sinks in, it’s really official,” he said. “Already yesterday the emotions were quite high. We were actually there but we still had to finish the race safe and in a good way. We enjoyed as much as possible and now we can really enjoy.”

“I’m very moved,” Molano said. “You can’t imagine such happiness. I think of everything I’ve done to get there, all the efforts we do for this as athletes, cyclists, human beings, when we leave our families at home to go far away.”

Evenepoel, who held the red jersey since taking the lead in the sixth stage and overcame a hard crash in the 12th stage, had secured the victory by holding off Enric Mas and the rest of his challengers in the last competitive stage on Saturday.

Evenepoel ended 2 minutes, 2 seconds ahead of Mas. Another Spaniard was third, with Juan Ayuso finishing nearly five minutes off the lead with UAE Team Emirates.

Evenepoel didn’t have to worry about three-time defending champion Primoz Roglic, who had to retire because of injuries sustained in a crash near the end of the 16th stage. Also not contending at the end was 2018 Vuelta winner Simon Yates, who was one of the many riders who had to withdraw during the race because of positive coronavirus tests.

For Evenepoel, it was about using his pedals to answer his doubters and critics, including Eddy Merckx, the Belgian great who had said last year that the youngster was unwilling to ride for his team.

Also last year, Evenepoel was flung into the barriers in the 17th stage of the Giro d’Italia, and the year before he survived a nasty crash in which he fell several meters off the side of a bridge and was hospitalized with a broken pelvis.

This year’s Vuelta marked an emotional farewell for veteran Alejandro Valverde, the 2009 champion, and Vincenzo Nibali, the 2010 Vuelta winner. Both are set to retire and were greeted with a guard of honor by the other cyclists.