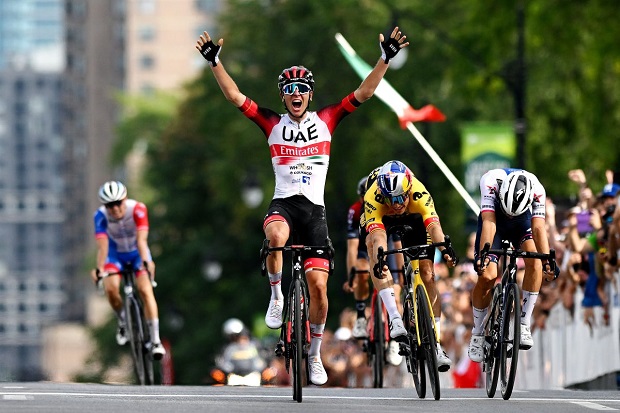 With two weeks to go before the road race World Championships in Wollongong, Australia, on September 25, two-time Tour de France winner Pogacar boosted his confidence by leading a five-rider breakaway with 12 kilometres remaining.

The quintet broke away on the 18th and final climb, setting up a brutal battle to the finish.

With just over 3km remaining Adam Yates and David Gaudu launched their final attacks, Gaudu hitting the front before Pogacar reeled him in with van Aert on his wheel.

“It was not just the sprint, but the whole race was hard, and the team worked super good. It was perfect,” Pogacar said.

“In the end, it was difficult because we know that Wout is one of the best sprinters in the world, but this is a tough finish. I believed in myself, gave it everything, and I succeeded.”

Pogacar said the race was just what he needed to prepare for the World Championships after his bid for a third straight Tour de France triumph saw him win three stages but finish second to Jonas Vingegaard.

“It was one of the hardest races in the calendar, you have to be in shape here,” he said. “After the Tour I was not in good shape, I was relaxing and building up to this final part and today was a super good day so I’m really happy and confident to go to the World Championships.”